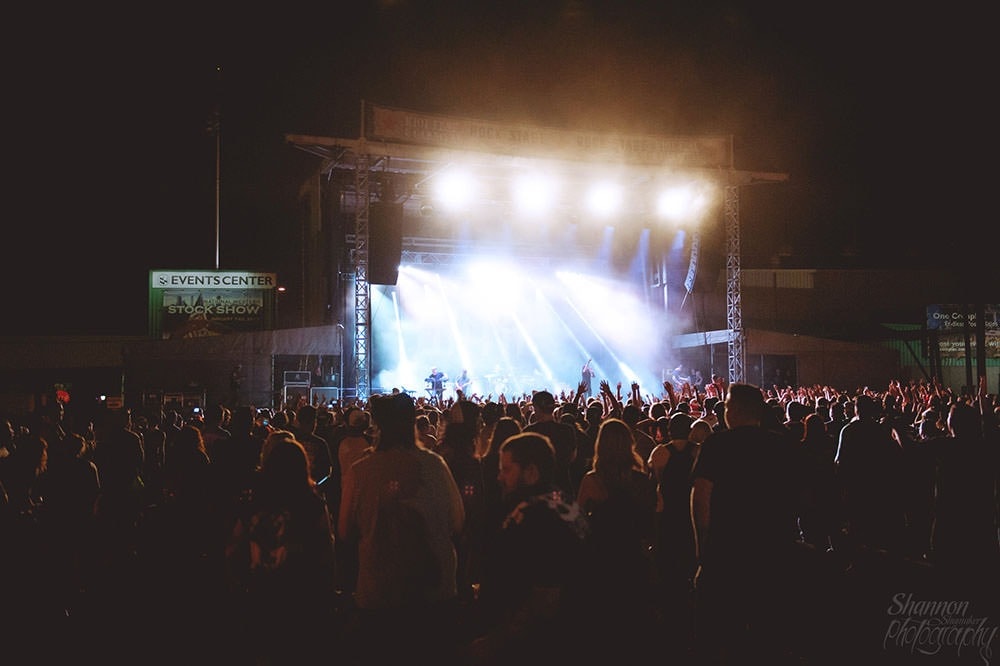 Another Riot Fest in Denver has come and gone, and this time it was bigger, badder and more diverse than ever. Things have changed quite a bit since Riot Fest first brought a weekend of music and mayhem to Byers, Colorado, but for the festival’s second consecutive year at The National Western Complex, it seems they’ve finally started to settle into Denver. Similar to years past, this year’s Riot Fest hosted a massive lineup of artists of every caliber and every genre, from rap and hip-hop to underground indie bands all the way to iconic metal and rock groups, including but not limited to Sunday’s huge headliner, The Misfits. What was different about this year’s festival was not the music, though, but the atmosphere and vibe surrounding it. Unlike last year, which hosted five stages, a full carnival and a wide variety of food vendors, things were quite a bit more simplistic this time around.

When festival-goers arrived at the National Western Complex, many of them already expected the new, slimmed down stages – this year, there were only four instead of five – but what many people didn’t anticipate when they made the daunting trek to the Roots and Riot stages was the lack of the festival’s signature carnival and food trucks. Instead, the grounds were fairly open, putting the focus more on what fans came for – the music.

I have to admit that at first, I was a little disappointed. Although Riot Fest isn’t about the carnival, watching bands play from the top of the ferris wheel was incredible, and it did give the festival a vibe that not many others have. That, and last year, I survived on nothing but Steuben’s green chili cheese fries and Sweet Cow ice cream, but both food vendors, among many others, were noticeably missing from this year’s festival. However, it only took about an hour before I forgot all about the lack of a carnival, a missing stage, or even food. It was then that the day finally kicked into gear, artists like Donna Missal and Death Spells starting things off on a strong foot, and quickly, it was apparent what makes Riot Fest so great, contrary to what the official “Riot Fest Sucks” merchandise may tell you.

Early into Friday, it quickly became obvious that the cutting down of stages was a smart move on the festival’s part. Not only did it make navigating the grounds much simpler, but it (as well as the missing attractions) increased attendance at each stage as well. Less bands were performing at the same time, giving concert-goers a chance to check out a band they had never heard of or planned on listening to before. For me, that band was Fucked Up. At the advice of a friend, I decided to brave the grueling heat and catch their set at the Rock Stage, and what resulted was a chaotic forty-five minute set that found vocalist Damian Abraham in the crowd more than he was on stage. Another highlight was the placement of certain artists on the Nicole Hoffman Stage (formerly known as the Radical Stage, located inside.) Last year, most performances at the indoor stage were noticeably barren. With four other (and significantly larger) stages outside as well as a carnival to compete with, drawing a large crowd was nearly impossible for even larger artists, but this year, nearly every act had a decent sized crowd. On Friday, NOFX filled the building to the brim, Saturday, I watched as People Under The Stairs coaxed willing participants closer to the stage, garnering a large crowd by the end of their set, and on Sunday, Sleigh Bells turned the Nicole Hoffman Stage into a spectacular light show, drawing fans in like flies.

Friday in particular was filled with emotional highs and lows. At 3:45, Motion City Soundtrack took the stage for the last time in Denver, and their performance in the grueling heat was both incredible and bittersweet. But later that evening, it felt as if there was still hope for the emo and post-hardcore scene as Thursday played their third reunion set in five years and first Denver show in even longer. While the sun set, I watched as frontman Geoff Rickly climbed into the large crowd as they sang the words to “For The Workforce, Drowning” back to him, and I realized what makes Riot Fest one of the best festivals (if not the best festival) to come through Colorado. It’s simple – it’s the music. While we said goodbye to Motion City Soundtrack, we welcomed back Thursday, Set Your Goals and The Misfits among many more, and simply enjoyed watching and discovering countless others.

Although it seemed impossible to top the incredible performances that rounded out Friday night – Deftones’ set was something otherworldly while Jane’s Addiction was larger than life – come Saturday morning, there were already plenty of bright-eyed festival-goers ready to do it all over again. The mellow Turnover provided a easygoing opening to the day on the Rock Stage while Diet Cig got us amped for the day. I mean really, I have no idea how anybody could be as energetic as frontwoman Alex Luciano was as she ran, kicked and danced around the Roots Stage. Easily one of the highlights of Saturday though was Set Your Goals’ Denver Reunion. Although the band has played quite a few shows since they announced the end of their hiatus last year, it was their first time back in Colorado since their return, and the pop-punk kings were welcomed with open arms as they churned out track after high energy track. If pop-punk isn’t really your thing, though, you probably found yourself over at Against Me!’s set as they completely destroyed the Roots Stage, even in the blazing sun and blowing wind. The crowd was almost impossible to navigate, and with good reason – even after playing their hearts out at their tiny Marquis Theater after show the night prior, the band was on their a-game.

From there, the day just seemed to get better and better. Billy Talent served fans their signature punk rock along with some quick-witted comments about this year’s election. Frontman Benjamin Kowalewicz was even kind enough to invite fans to Canada in the off chance that Donald Trump becomes president. Later in the evening, chaos ensued at Leftover Crack, while DeVotchKa slowed things down for fans on the opposite side of the venue. Opting to take it easy for the remainder of the day, I spent the rest of my evening at the Rock Stage, watching as Glassjaw performed to a massive, passionate crowd while Underoath (who also recently reformed earlier this year) followed, vocalist Spencer Chamberlain even expressing his love for the mysterious New Yorkers.

After the day’s festivities, I found myself trekking to downtown Denver to catch Thursday’s after show The Marquis Theater, which ended up being one of the highlights of the weekend. With a line that wrapped around the block and a guest list that likely put the venue way over capacity, things got wild at The Marquis, and after a few red bulls, a couple of beers and a slice of pizza, fans were ready to do it all over again. Attending an after show that goes well into the night (this one in particular ended just shy of two in the morning) may sound like a stupid thing to do after spending all day at Riot Fest, but I urge you to do it, just once. Everyone else in the building will be just as sweaty and exhausted as you, and that makes it even better. There was a sense of community in that tiny room as Thursday took the stage for the second time in two days, and what resulted was a much more intimate performance than the day prior, as Geoff Rickly chatted with the crowd between nearly every song, either making small talk, or going in depth about the stories behind each song. It was every Thursday fan’s dream.

Getting home well after 2AM and waking up early for the third and final day of Riot Fest on Sunday may not have been the best idea, but a few energy drinks in, and I, as well as many festival-goers charged headfirst into day three. Sunday was an unpredictable one, with scattered storms, on and off rain and blistering heat, but that didn’t stop artists from playing their hearts out. Converge really kicked the day off right, and one song into their set, a fan in a wheelchair found himself sitting proudly on top of the excited crowd – it was an incredible sight. Packing the Nicole Hoffman stage once more was the spectacular Jule Vera, and later Holy White Hounds, but the highlight of the day was Flatbush Zombies, who destroyed the Rock Stage in the middle of the day. Not only was the crowd absolutely wild, but the energy that they exuded on stage was impossible not to love, even as someone who had never listened to them prior.

Sunday was dominated by rap and hip-hop, and next on the Rock Stage was 2 Chainz. However, this was also when one of the only major hiccups of the festival occurred. Slotted to go on at 5:45, 2 Chainz was noticeably absent from the stage ten, fifteen and even twenty minutes later and unfortunately, when he finally took the stage at nearly 6:15, it was time for many fans to leave in order to catch Bad Religion, who was performing on the opposite end of the venue, and that’s exactly what I did. Bringing the high energy back to the Rock Stage later though was Tyler, The Creator, who came out like a tornado, and then did it all over again when the crowd wasn’t giving him exactly what he wanted. It was cocky and confident and everything fans expected from his set, making it a very memorable performance. But obviously, the reason most attendees were there that day was The Original Misfits reunion, which closed out the entire weekend. Not wanting to miss anything, many fans caught a bit of NAS’ set before running over to the Riot Stage to end the night. The largest crowd of the entire festival gathered around the main stages as Glenn Danzig, Doyle and Jerry Only took the stage together for the first time in 33 years, and even from the back, it was a once in a lifetime performance.

Walking back to the car at the end of the night with hundreds of exhausted punk, rap, hip-hop and metal fans, I already began to miss Riot Fest. It isn’t very often that one festival can bring so many different genres of music together and do it right, but that’s exactly what Riot Fest has done in Denver for the past four years, and will likely continue to do in the future. Last year, I found myself thinking it couldn’t get much better than Ice Cube, Tenacious D and Modest Mouse, but this year topped it and then some, which begs the question: What will Riot Fest do next year?