To say that the past year has been a whirlwind for Denver singer/songwriter, Sophie Gray would be an understatement, but as we sit together at Mutiny Information Cafe one snowy evening, discussing her new music and big plans for 2020, which likely coincide with a very busy school year, she doesn’t seem overwhelmed at all. In fact, she’s simply excited, and who could blame her? Following her entry in Channel 93.3’s Hometown For The Holidays last December, Sophie’s latest single, “Twisted” has taken off on Spotify, garnering just shy of 54,000 streams, landing her a placement on the platform’s Fresh Finds playlist, multiple international New Music Friday playlists and garnered a lot of industry attention, but the amount of traction that the song has gained comes as no surprise. Although she is young, Sophie Gray already has plenty of experience writing, recording and even performing her own original music.

After picking up the guitar at only seven years old and surprising her music teacher with her own original take on “Twinkle Twinkle Little Star,” Sophie quickly found her footing in creative outlets – writing her own music on guitar, delving into creative writing, singing and finally combining all three – and just last year, she released her debut single, “Little Blue Heart” at just fifteen years old. I’d say the rest is history, but Sophie’s story is currently still being written, and that’s just the way she likes it. Although she was first inspired by artists like Taylor Swift and Joni Mitchell, Sophie is determined to use her wide range of influences to craft her own sound. After all, she’s still just a teenager with plenty of room to grow, and she’s absolutely aware of that.

“I’m so young – I want to be able to move around in my style,” Sophie explains when talking about experimenting with new sounds and genres with her music, “Putting out some songs that are a little bit different from each other is really important to me.” And so far, she’s sticking to her word. “Twisted” is a shining, moody pop track that falls in the same vein as artists like Lorde, which is a far step away from the twangy, rock ballad, “Little Blue Heart.” The latest music that she has been working on even finds a way to dive a little more into dark-pop before playing around with some Jazz-influenced songwriting. As an artist who is still finding her footing in her local music scene, she has the room to experiment with her sound and her identity, and she’s taking full advantage of it.

One of the many consistent things about Sophie’s music, though, are her lyrics. “I think for me, it’s always been the writing first and then the music kind of came along with it,” she expresses. Since the beginning, Sophie has been influenced by songs that tell a story or really say something, and her own music is a direct reflection of that. “Twisted,” for instance, is “about things I’ve sat around and observed other teenagers doing.” 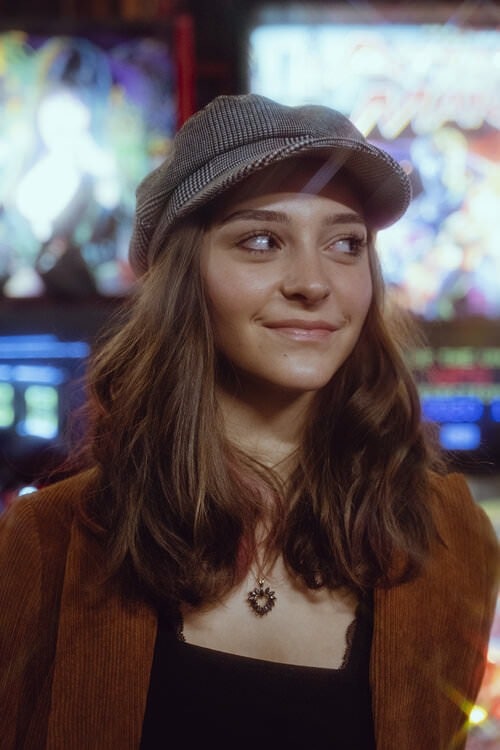 Sophie knows that she is young and just getting her start, and while that may be daunting in today’s music industry, she’s definitely up for the challenge. In fact, it actually seems to fuel her in a sense. “It’s comforting to know that people from the same place that you come from are doing the things you want to do,” she says of the Denver music scene, “Most of the people in the music scene I meet are older than me, so it’s nice to have all of these mentors and people to look up to. It helps me a lot to stay in the game even when I feel like it’s an absolute disaster.”

She continues, “Sometimes it’s stressful because I’ll see an eighteen year-old leave to go on tour, and I’m like, ‘Oh, two more years, and that’ll be me. What if it’s not me? What if I’m not leaving for tour in two years?’ There’s always pressure in it, but it helps keep me motivated.”

That motivation has Sophie gearing up for a jam-packed 2020, as well. With new music on the horizon, Sophie is eager to experiment with new sounds and finally hit the stage a bit more. While she has performed solo a handful of times, she is looking forward to putting together an exciting live show to match her wide range. “I’ve always loved performing, so I’m really excited to work on a live show that’s a little bigger and a little more exciting to watch,” she explains, “I have so much room to take risks right now.”

As for what the future holds, there isn’t necessarily a set path for Sophie Gray, and honestly, that feels perfectly on-brand for her. It seems that Sophie is discovering more about herself every day through her music, and she’s perfectly okay with not having it all figured out right now. In fact, she almost seems to thrive off of the uncertainty of it all.

When I asked Sophie if there was anything that she wanted to add near the end of our chat, she wasn’t quick to plug any upcoming singles or shows (I can do that for her – you’re definitely going to want to keep an eye out for more new music soon) but instead, she used that moment to give advice to other aspiring artists like herself, and to drive home the theme of our entire conversation – that she knows that this is only the beginning for her, and the future is clearly bright.

“To other young artists, I know that putting your music out there is scary. It’s terrifying. And you’re gonna hear people say bad things about it because they’re teenagers, and that’s what they do,” she says with a smile, “But it’s so worth it. I can’t imagine what my life would be like if I never put “Little Blue Heart” on Spotify. That’s the best choice I’ve ever made in my entire life.”