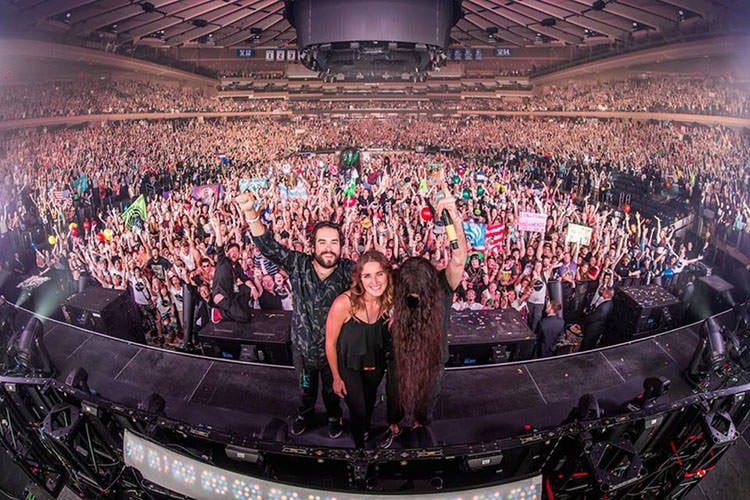 Jake Schneider began his career in music just like anyone else – as a fan. From riding the rail and moshing at punk and ska shows when he was younger, to falling in love with hip-hop and spending late nights learning about countless artists and genres of music to better understand his first job in the industry, Schneider has always been passionate about music, so his current position as a Partner and Director of Agency Development at Madison House Inc., (a booking and management company based in Boulder, Colorado) simply makes sense. The 33 year old entrepreneur didn’t simply become the booking agent for some of the most successful and cutting-edge acts in music – including BASSNECTAR, Beats Antique, Lotus and Paper Diamond, just to name a few – without hard work, though. Thankfully, we recently caught up with him to shed some light on the music industry, the buzzing Colorado music scene and much, much more.

The Prelude Press: What first drew you to working in the music industry?

Jake Schneider: I was a big live music kid growing up. I loved the punk and ska worlds, the energy those shows brought, and was “rail-riding” and moshing my way through middle school and high school at Minneapolis/St. Paul area venues like the legendary First Avenue Club, Fineline, and some other smaller arts spots like the Fireball Espresso Cafe, checking local and developing acts out. When I left high school for Iowa City, IA to attend the University of Iowa, I continued doing the same things at Gabe’s Oasis and other local haunts, and saw an amazing opportunity to work with live music as I heard about the University’s renowned program, “S.C.O.P.E. Productions”, which was a student activities organization that I joined up with, eventually ended up running, and neglected academia to do so! I wish they would have given me some college credits for that GRIND!

What were those first few years like when you were just starting out? What was the biggest obstacle you had to overcome or challenge you had to face?

I think broadening my horizons musically was something that I realized needed to be done. As I took over the position of “Talent Buyer” at SCOPE., I was all of a sudden thrust into a situation where I was booking talent for basically all venues in Iowa City that were above 350 capacity, so there was a requirement to learn more about acts that weren’t in my wheelhouse, ranging from Dar Williams to Rufus Wainright to Brooks & Dunn.  I was into hip-hop as a kid, but got really into it and start digging into electronic music in college as my tastes grew. I taught myself how to DJ and then started playing out 3-5 nights a week, which really fostered my love of hip-hop, especially independent hip-hop. There was so much of it coming from the Midwest with collectives like Rhymesayers/Atmosphere, Molemen, Typical Cats and the other labels like Def Jux, Quannum, etc had vibrant rosters of hip-hop touring acts that were selling a legitimate amount of shows out all over the place. With that being said, there was a million different genres and types of music that I still needed to familiarize myself with and it wasn’t easy. I would sit there till three or four in the AM every night and just analyze music business and industry websites like Pollstar.com, Billboard, MTV News (which seemed to be a bit more applicable back then), Jambase, etc. I wanted to know what bands were going out supporting other acts, who represented various artists, and what acts were changing agencies and being added to some of the earlier wave of this new festival resurgence – I remember seeing the lineups for stuff like the fledgling Bonnaroo, Coachella, Langerado, etc and having my mind absolutely blown. Also, touring Jam Bands were most definitely pushing tickets, and despite my lack of attention-span for their longer performances, I started getting into, understanding and then appreciating bands like Moe, Umphrey’s McGee and The String Cheese Incident (who is a LONG LONG time client of Madison House, basically developed and signed by original Madison House partners, Mike Luba and Nadia Prescher, two AWESOME human beings that played an amazing and instrumental part of me being an agent). It took a bit, but after awhile I could safely say that I was just a MUSIC fan in general.

What has been the most rewarding thing about working in the music industry?

Watching your acts grow into a force to be reckoned with. Playing the long game of selling out a 200 capacity room and increasing that capacity at times in certain markets until that act is catering to shows with thousands of fans. That’s what’s really rewarding. Looking out over a sold out Madison Square Garden crowd with Bassnectar and his team was an amazing thing to be part of, because early on in the career we were playing 300-500 capacity venues.

You’ve been working with Madison House for quite a while now and are now a Partner and Director Of Agency Development. How do you feel you’ve grown from when you first joined Madison House to now?

So much growth has happened with the agency since I started working here in 2005 – be it from the diversity of genres we now work with, to constantly adding more agents, to developing healthy relationships with promoters worldwide. My business partners and I have worked at achieving this coveted status as a marquee indie touring agency and we’re being recognized for it. To us it’s not about constant “pats on the back”, but some of the little things most definitely boost morale – like being an artist’s first pick for a booking agency or being nominated for stuff like the “Independent Agency of the Year Award” this year at the Pollstar Concert Awards. We have complete confidence in our company’s ability to deliver amazing looks for our clients, be it festivals or basic strategizing on the touring level. We always applied a grassroots touring philosophy to our clients. In addition to the major cities, we focused on touring in secondary and tertiary markets, and then began applying that model to our other newer acts. There’s no universal model for any particular artist, but there are similarities that can be shared and with the diversity of our roster, we’ve worked in pretty much every world you can think of in the live touring sphere, so the knowledge is there for myself, my partners, and the rest of the agents over here to provide SUSTAINABLE careers for our clients. We’ve also created a healthy environment for our employees to grow and are constantly promoting from within and/or bringing in agents from outside our company to roll with our mindset and we’re able to trust all of these individuals to go out and rock it for our collective roster.

What has been the most rewarding project to work on or artist to work with?

It’s all rewarding. There are different general ceilings for certain types of clients, but at times as the type of music people listen to or go to see changes, those acts can bust through those ceilings and that’s a very exciting and rewarding experience. Watching bands like Lotus grow since the day I started at Madison House into an act that is selling out Red Rocks and has a hit album that’s charting on all kinds of radio formats right now is epic!

What has been the most important lesson you’ve learned since you moved to Boulder to join Madison House?

Relationships are everything. You need to treat your promoter partners as you would want to be treated, being as that it’s their finances on the line (despite the fact that it costs money for the artist to go out and tour as well) and the idea is for ALL of us to make money. Not just the agency and the artists, but the promoters so that they can continue providing amazing events and entertainment in their respective markets/cities. These are our “partners” in this business and without them where would we or our clients be?

With Denver rapidly growing and expanding, what do you feel has been the best thing to happen to the Colorado music scene over the last few years?

Colorado has proven to be one of the STRONGEST markets in North America for countless genres of music. At the end of the day, you’ve got an outdoor wonderland that boasts skiing, snowboarding, hiking, fly fishing, and other amenities that everyone wants to come take part in and you get to pair that with indoor shows, but even more importantly, gorgeous outdoor events like Chautauqua’s music series in Boulder, the Mishawaka Amphitheatre, or the VERY OBVIOUS, legendary Red Rocks – not to mention the endless mountain town ski events that keep people coming. It’s a destination for weekend guests AND transplants looking to change their quality of life – I believe Colorado is one of the top states for incoming citizens right now. And let’s not forget to mention, all of this paired with the recent excitement in recreational marijuana, we can expect a ton of people to come out for events. The marijuana doesn’t necessarily drive the industry here, but they’ve most definitely got their hands in the presentation of a plethora of events and are able to really give back to the local music community.

When looking at a music scene like Denver or Boulder, how do you hope to help it grow or flourish? If you could better the Colorado music scene, what would you do or change?

Honestly, I’m incredibly happy with what the various promoters across Denver and Boulder, and in the mountains to some extent, are bringing to the table. There’s so much great music, an abundance of amazing venues, and no shortage of unique experiences. If the worst complaint that I have is that I am tired of doing the intense walk up the steps at Red Rocks towards the end of the season after we’ve covered dozens of shows there all summer, I’VE GOT IT GOOD.

What piece of advice would you give someone who is trying to get their foot in the door in the music world?

Ask questions and don’t be abrasive. When I started out in the music industry, there was a ton to learn, and it was amazing that I had people like Ian Goldberg from Jay Goldberg Events, or my current partners, Nadia Prescher, Jesse Aratow and Jeremy Stein to just HARASS with questions. No one appreciates someone who talks nonsense and spews opinions on things without really knowing what they’re talking about. Having the humility to learn from others about new types of music, how to develop acts, etc is very valuable and I think you’re more appreciated for it in the long run as to chapping people in a way that might get you labeled the annoying “know-it-all”. You should also do your own independent research though (without burning yourself out) – read as much as you can about the industry and who does what, what acts are represented by various agencies or agents, etc. The idea is to be able to talk your way through a music industry conversation with as much knowledge as possible, but without being embarrassed to just ask questions, because people are willing to share their experiences and insight as well.

Thank you for taking the time to chat with us! Is there anything else you would like to add?

Much appreciated. Thanks for allowing me a forum to pontificate a bit here! Stay humble and let your work speak for itself! ROCK!

STAY UP TO DATE WITH MADISON HOUSE INC & JAKE AT https://www.facebook.com/MadisonHouseInc