INTERVIEW: Denver’s Decatur Talk About Their New EP & Plans for the Summer 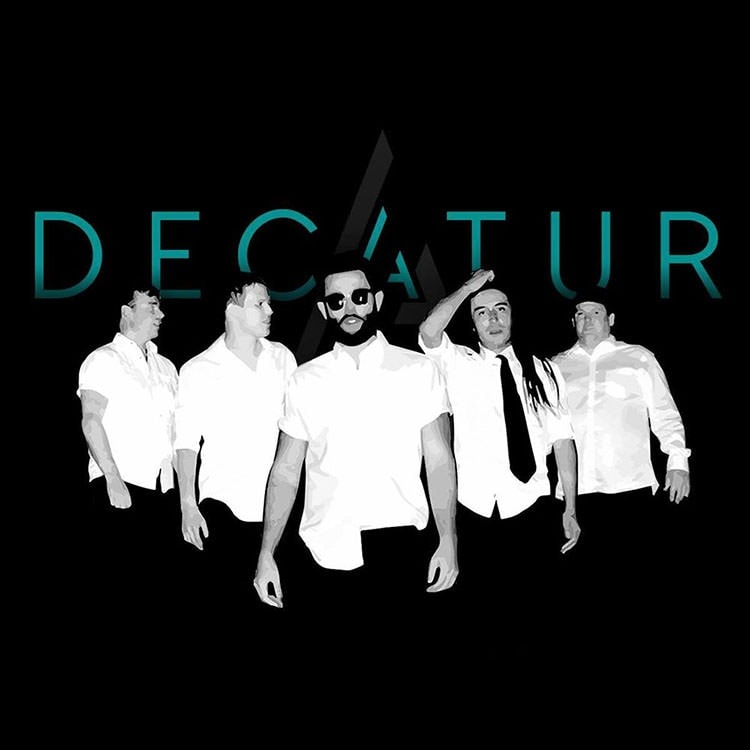 Denver’s Decatur have one incredible summer ahead of them. With their debut EP out soon, a release party coming up on June 9th and even a guitar giveaway in the works, these next few weeks certainly promise to be exciting.

Decatur’s wide range of sounds stems from the members’ shared experiences in the music industry. Members have performed across the United States and Mexico at venues including the House of Blues Chicago (opening for All Time Low), The Walnut Room , the top of Red Rocks Amphitheater and VANS Warped Tour. With a strong musical background and big plans for the future, Decatur will easily go far, and you’re going to want to be there from the start! Catch the band live at their EP launch party at The Walnut Room in Denver, CO on June 9th. Tickets are available here.

Can you tell us a little bit about Decatur for anyone who might not be familiar?

Decatur is an Alternative Rock band based in Denver, CO.  Our collective has extensive and varying backgrounds which leads to a deep and atmospheric sound. Sean DeCrescenzo, our front man, brings it all together with his songwriting and dark vocal tone. There’s a lot of modern elements and plenty of guitar work in this band which is something that sets us apart from other sounds out there right now.

Prior to forming Decatur, you’ve all had quite a bit of experience in the music world. What are some important things you’ve learned that you’ve brought into this project?

Sean DeCrescenzo: I think that my approach to songwriting has always been modesty.  I’m not trying to write the best song out there.  Just the best song I can in the moment.  I won’t force a song to go where it doesn’t want to naturally go.

Quinn Cox: I think patience also pays off. Knowing when a song is done is a process on it’s own and we try to ride the line of complete but still visceral and alive.

Is there anything that you’d like to try or accomplish with Decatur that you maybe haven’t been able to do in other projects?

Quinn: I feel that I have already accomplished a few of my long term goals with this project. I have always striven to make a collection of music that reached the peak of the band at the time. I am very stoked on the final product and each song is better than I could have imagined at the outset. I really just want to get as many people to hear it as I can.

Sean: Coming from a background in mainly folk rock and acoustic guitar Decatur gave me change to branch out and explore sound a bit more.  Over the past two years the guys and I came into a sound that we didn’t expect to find.  I really just want to pursue that and find where the sound and the project takes us.

You guys are just getting ready to release your first EP, as well! Going into writing and recording it, did you have any major goals in mind?

Quinn: Just a great final product. I was lead engineer for the project and really wanted to get elbows deep in something I would appreciate forever. There were a lot of other hands in there and lots to manage. Jon Bonus and from SIDE 3, Xandy at Mighty Fine Productions, Brian Malouf on the mix and Dominic Maita Mastering.

Sean: I think our end game was trying to understand who were were as a collective.  It wasn’t about finding our individual sounds in the project but finding our sound as a whole.  We really wanted to make the best record possible and in the end I think we’re all satisfied with what we ended up with.

Were there any subjects or themes that you wanted to touch on with the EP?

Sean: There’s a lot that went in to the process of this record and it touches on a lot of specific moments in our lives.  For me the record was almost a coming of age.  There are some songs that touch on parts of my life I hadn’t revisited in years.  I think that there are undertones throughout the record, whether it be in the music or the lyrics, that speak to the dark moments of our lives.

Quinn: Sean wrote a lot of the lyrics on this record and it has the dark residue from the angst of a life lived in the ever expanding digital world we live in. I am always trying to find the veins that connect me and my experience to a potential listener. How do we share reality or whatever this is.

What was it like to get to work with Lance Bendiksen and Brian Malouf for the EP? What were they able to bring to the table to help create the best release possible?

Quinn: We were very excited to have the opportunity to work and create with Lance. Lance knows real music and what makes great music great. He gave us loads of guidance and definitely pushed us for more and a little more …and some more, when we thought we may have finished. The experience and musicians he brought to the record ( John Magnie from the Subdudes, Billy Payne of Little Feet and the Doobie Brothers and Percussionist Christian Teele) really made this whole thing possible and I feel lucky for the experience.

Brian Malouf is where it’s at when it comes to a mix. The way he can elevate a track to it’s fullest potential is a true art and I couldn’t be more excited about the mixes he made.

Tay Hamilton: I have worked with Lance in the past and it has always been a learning experience. He does not tell us what to do, he listens to what we already do and shows us how to do it better. Sometimes I don’t even realize it until I hear the end result. I’ve learned to trust his ear even if at the time I think otherwise.

What would you like listeners to be able to take away from the EP or your live performances?

Sean: The theme throughout the album has to do with the dark side of human nature.  However, I really think that reflecting on that is something that we should do so we don’t fall into bad habits.  But with the live show we really just want people to walk away having felt the energy that we put out there.

Tay: Musically speaking, you are going to hear a little bit of everything but the songs are crafted in such a way that it just flows.

Next month, you’re celebrating the EP release with a launch party at The Walnut Room. What can listeners expect from the upcoming show?

Tay: You are going to have a great fucking night!! Five bad ass motherfuckers are going to walk on stage and soothe your soul with their musical foreplay just to flip your head upside down and rock your face off!!

Quinn: It is definitely a long time coming and we have a lot of excitement about the project and the results we achieved. It’s going to be a celebration of music and the friends we have made along the way. We are also giving away a Fender Special Edition Telecaster to one lucky fan as well as 2 free tickets to the show. We have gratitude for the opportunity to make art and share it with the world and that will shine through.

Do you have any other big plans for this summer?

We have a top secret, surprise performance coming up we’re stoked to announce… we could tell you now but, of course, we’d have to kill you. We are always working on new fun ways to bring Decatur to the people aside from shows and new music so keep your eyes and ears out!

Thanks very much to The Prelude Press for taking part in the experience and helping us share our excitement about the project and upcoming show!