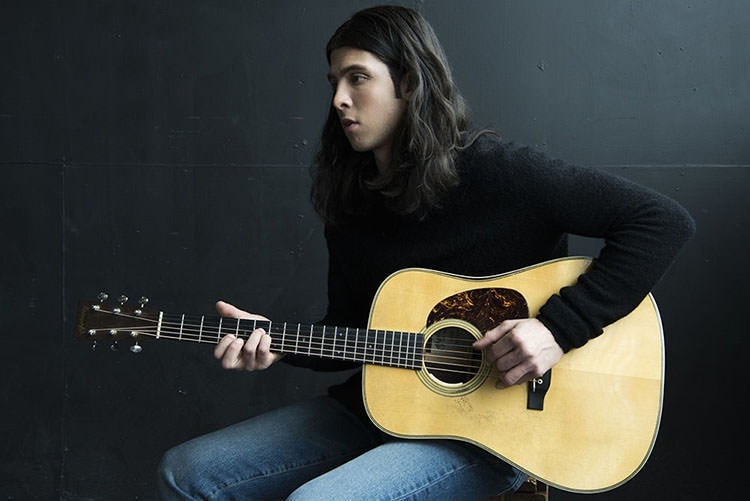 22 year-old singer/songwriter Billy Raffoul made his debut on Interscope Records earlier this month and is currently gearing up to release his new album later this year. With trademark rough-hewn, low-timbred rock and roll sound that will easily take you back in time, Raffoul is weaving stories with his music, especially the just-released single, “Driver.” A ordinary story about picking up a hitchhiker on the way home from a show eventually transformed into the track, which can be heard below.

With plans to release new tunes and a music video for “Driver” soon, on top of hitting the road later this year, Billy Raffoul is sure to be busy in the coming months. Listen to his first single and get to know him now below!

Can you tell us a little bit about yourself for any readers who might not be familiar?

Haha Well I’d be shocked if almost all weren’t familiar.. my name is Billy Raffoul.

I am a singer/songwriter from the most southern part of Canada, Leamington Ontario.

What first drew you to music and inspired you to start writing and playing?

I grew up in a very musical and artistic home. My father was and still is a rock and roll musician and my mother both a writer and a painter. It was through my parents and their influences that I was inspired to begin.

How do you feel your upbringing that the music and art that your parents were creating have affected you as a musician today?

I think it’s an integral part of the music that I make.. as a child, the first records I’d ever heard were that of the Beatles. My father would play them for me and my brother, Peter. We were so young and yet had so much of their catalogue memorized. In addition to that, my mother introduced me to U2 and hearing my father play his interpretations of classic rock songs really would shape the kind of music I listened to and eventually the kind of music I wanted to create.

You just released your debut single, “Driver” this month! It being the first piece of music that many people will hear from you, what did you want to accomplish with this song?

To be honest I had written so many songs for this album that I truly had no idea what the first song released would be. I think driver has an attitude about it. It gets very loud all of a sudden. When the record label said that this would be the first single I was kind of surprised. Excited all the same.

I know there’s a bit of a story behind “Driver,” as well. Can you tell us a little bit about it? Did you know then that it was going to transform into a song?

Sometime last summer I was on Pelee Island.. a small island off the shore of Leamington. After performing with my father’s band and on the way back to my girlfriends cottage we picked up a hitchhiker. To be honest It was a pretty ordinary experience.. just helping someone out. I didn’t really expect the night to stick with me, let alone inspire me to write a song about it. Then for that song to become a single is kind of cool. Its origins are so simple but people can take it however they want.

On top of the new single, you’re currently working on your debut album for Interscope Records. Do you have any major goals in mind for the other songs on the album?

For all my music, I just want it to reach as many people as possible. I can only hope that people find their own stories in these songs. Their stories won’t be the same as mine or the ones that inspired the songs in the first place and I think that is the beautiful thing.

What would you like listeners to take away from your music, especially if this is their first time listening to you?

Well the goal is for them to take away the record isn’t It? Download, Stream etc.. haha in all seriousness. If a listener finds anything in the songs that draws them back in I’ll feel like I’ve done my job.

When can fans expect to hear some more new music?

That is a great question. One that is probably better directed at the folks upstairs.

I’m not sure when.. but I know that both I and the record label can’t wait to share the music with everyone.

My partner in crime and producer on the album, Mike Crossey and I have some more time on the books to go in and really finish it up. After that, the band and I will be on the road for the majority of the rest of the year. As for the immediate future.. we plan on releasing a music video for Driver in the coming weeks so stay tuned for that!

Thanks for asking the questions!