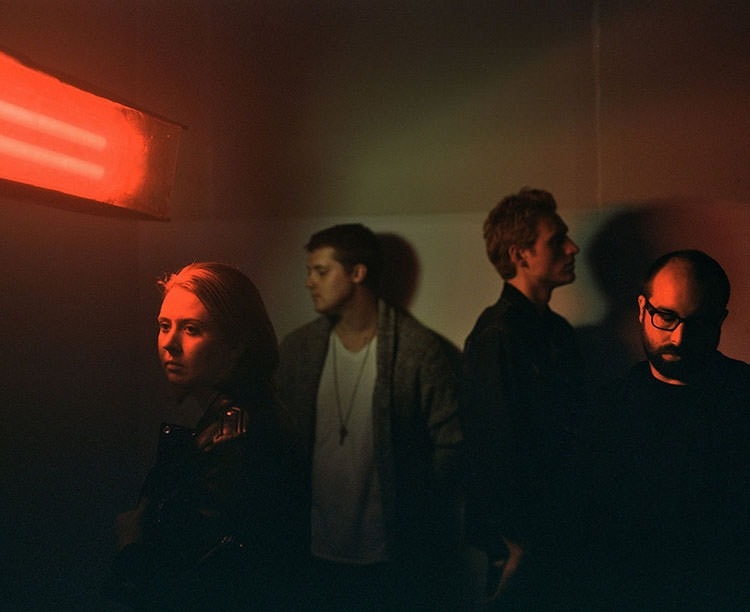 Having faced several challenges and lineup changes since the release of their debut EP, Wonderlust in 2013, DRMCTHR are not only back with a fresh new sound, but an entirely new identity and outlook. Consisting of Chelsea Tyler (vocals), Bryan Czap (guitar), Craig Perkins (bass), and Billy Wahler (drums), the band has been turning heads with their atmospheric sound since the release of their debut and with their new full-length, Hold Your Love dropping on November 17th, they’re back and better than ever. DRMCTHR is signifying the new chapter of their story with a change in the spelling of their name (previously Dreamcatcher) and the release of their hauntingly beautiful single, “Apartment,” which can be heard now below.

Hold Your Love is out November 17th, 2017. Until then, get to know a little bit more about DRMCTHR and their growth over the years below.

Can you tell us a little bit about DRMCTHR for any readers who might not be familiar?

DRMCTHR started in 2012 by Bryan, Craig, and I. Our music can be described as Alternative- Pop. A lot of our musical influence comes from 90’s artists including Alanis Morissette, Nirvana and Bush.

Now, you’ve already been through quite a few changes and faced some challenges as a band, which lead to the change in the spelling of your name and your new sound. What are some of the most important lessons you’ve been able to take away from everything so far?

Growth, not only within the band, but in our personal lives too. I think patience and perseverance are the most important lessons that come forward. There were barriers to push through in order for this new record to happen. Looking back, we are proud at how we handled the challenges. It only made us more determined and stronger.

What makes the current lineup perfect for DRMCTHR going forward? What are some of your favorite things about this group of musicians now?

Craig is our original bassist and we could not be more excited. Losing him really shook us.  Craig’s sound and work-ethic helps lead the core of this band. I feel like we have the energy back and are ready to prove ourselves.

You guys are getting ready to release your new album, Hold Your Love in November! What are you most excited for listeners to hear on it?

We are so happy to finally release Hold Your Love. It has been a long, 4 year process. At one point, we really did not think this record was going to be released. We are most excited for everyone to hear the story within. Hold Your Love is the story of where we have been these past few years and how it felt during that time period. I think there are moments on this record that people will really be able to relate with.

Since there has been some time between releases and considering all of the changes you’ve been through since then, how do you feel you’ve grown or evolved since your debut EP?

We have learned so much about ourselves and music, in general. We took parts from Wonderlust (debut EP) and tried to expand on them for this record. We wanted to write a record that someone could live in. I think we were able to accomplish what we wanted— A bolder, sharper and more refined version of DRMCTHR.

What were some of the most rewarding moments of working on Hold Your Love?

Finally hearing our record on vinyl has been one of the most rewarding things in my life. We always wanted DRMCTHR on vinyl, and to listen to it with Bryan and reflect on the process was so cathartic. We also got to work with Chris Kamrada and Maika Maile, who we’ve looked up to and wanted to work with since we started the band. The process was difficult, but we’re so proud of the end result.

You also recently released “Apartment” from the album. What inspired this song?

I came home from the bar one day with Craig and Bryan had this incredible, eerie, anxious-sounding instrumental and I absolutely fell in love with it. Lyrically and vocally, I wanted something that added to the eerie/haunting vibe of the instrumental but, I wanted it to be a little more superficial than some of the other songs. It’s about the trepidation you feel as you start to advance your relationship with someone; do they want me? Do I want them? What happens next?

Going into the rest of 2017 and looking toward 2018, what would you like to accomplish as DRMCTHR?

We want to share Hold Your Love and talk about it with as many people as possible. I feel like so many people can relate to what we’ve gone through. I am looking forward to having conversations with fans and hearing their stories. As for 2018, we plan to be touring. Announcements coming soon.

Do you have any other big plans for the coming months and new year?

We have some other plans, including some touring in the winter that will be announced soon. We just want to get on the road, meet some people, and enjoy the results of this process.

Thank you so much for speaking with me! We can’t wait for people to hear Hold Your Love and are so grateful for the support we have received thus far. You can pre order the record at www.DRMCTHR.com.