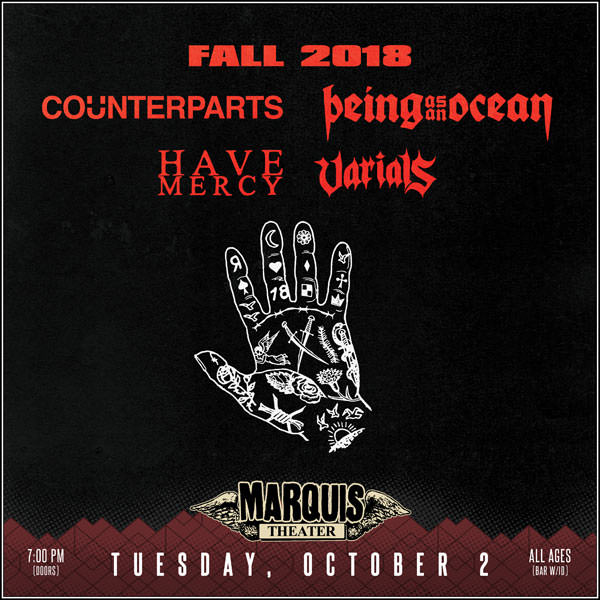 Canadian metal/hardcore band Counterparts celebrated the release of their new EP, Private Room on September 7th and just hit the road with Being As An Ocean on the Private Room Tour in support of the release! The run of tour dates falls in line with the theme of the EP, finding Counterparts performing in small, intimate rooms across the U.S., with an upcoming performance at Denver’s own Marquis Theater on Tuesday, October 2nd.

Counterparts’ Private Room EP is a collection of songs recorded during the making of their last two records, that while not featured on those albums, are standout tracks deserving of their own proper release.

“Private Room is a collection of B sides from the last two records that we think deserve to see the light of day. The EP is dedicated to our love of private room karaoke and all of our friends/fans that put up with our psycho bullshit on and off stage.” – Brendan Murphy

Formed in 2012, Being As An Ocean hails from Alpine, CA, just outside of San Diego. The band was previously signed to InVogue Records, and released a handful of successful records (Dear G-d…, How We Both Wondrously Perish and Being As An Ocean, over the span of three years. During that time the band toured the world non-stop with bands like August Burns Red, Senses Fail, For The Fallen Dreams, Hundredth, Counterparts, Liferuiner, The Elijah among others, including multiple tours in the U.S., Europe, Australia and Canada; amassing an army of fans along the way.

In 2017, Being As An Ocean struck out on their own to independently release their next record, the long awaited follow up, Waiting For Morning To Come, which was well received by fans and critics and marked their return to the Independent Albums Chart.