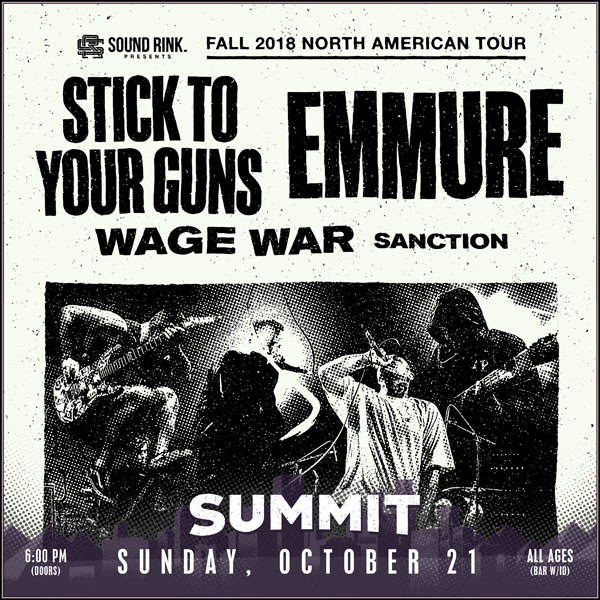 Last night, Stick To Your Guns and Emmure kicked off their co-headlining North American tour alongside Wage War and Sanction. On Sunday, October 21st, the tour will make its way through Denver, Colorado with a stop at the newly remodeled Summit!

Stick To Your Guns’ upcoming run marks a special one for the band, as it coincides with their current #HopeBringers initiative. For the entirety of this tour, the band is encouraging fans to take photos of themselves making a difference and volunteering in their communities and post them on Twitter and Instagram with the hashtag #HopeBringers. The band will be choosing a few fans to feature on social media and win some tickets to an upcoming show.

In addition, the upcoming date at Summit will host a Homeless outreach event with Denver Homeless Out Loud and Food Not Bombs. The band is currently asking for donations of sleeping bags, blankets, tents, tarps, heavy winter gloves, hand-warmers, or hygiene kits, and in return, fans will receive a special screen-printed poster. LEARN MORE ABOUT THE EVENT AND #HOPEBRINGERS HERE.

Emmure are currently touring in support of their 2017 release, Look At Yourself. Their latest release represents a coming of age for Emmure, a new chapter in an aggressive autobiography that stretches back to the band’s very first album. With a massive catalogue of aggressive, hard-hitting tracks, the band will have plenty to pull from on this upcoming tour, making their set a must-see.