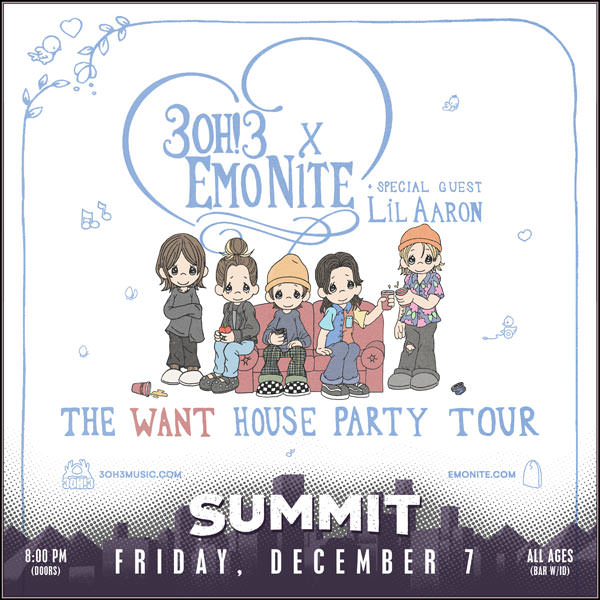 Just last month, 3OH!3 and Emo Nite LA joined forces to kick off a tour like no other – The WANT House Party Tour! Featuring special guest lil aaron, these shows are an actual house party, and the tour wraps up in 3OH!3’s home state of Colorado at Summit on Friday, December 7th.

For the upcoming show fans are going to be able to be a part of each night without the typical constraints of set times and with an opportunity to really interact and connect with artists, just as if you were throwing this party in your own living room. Nathaniel Motte and Sean Foreman of 3OH!3 shared that, “We want to include people from different backgrounds, walks of life and foster an environment that breaks down the barrier between the artist and fans. We want to be able to throw a party, celebrating 10 years of WANT and bring the unique energy of Emo Nite along with the energy we have always had.”

The tour is a massive celebration of 3OH!3’s debut album, WANT, which was released in 2008. That’s right: ten years ago 3OH!3 burst onto the scene Kool-Aid Man-style and blasted the world’s eardrums with a brand new sound. The duo, fresh out of school (one foregoing medical school and the other forgoing a promising career as a bike-sandwich-delivery-guy) released their first single, “Don’t Trust Me” in June of 2008. The record found its way into the nation’s heart like bacon grease; blending undeniable synth magic with a tongue-in-cheek, extremely catchy hook.