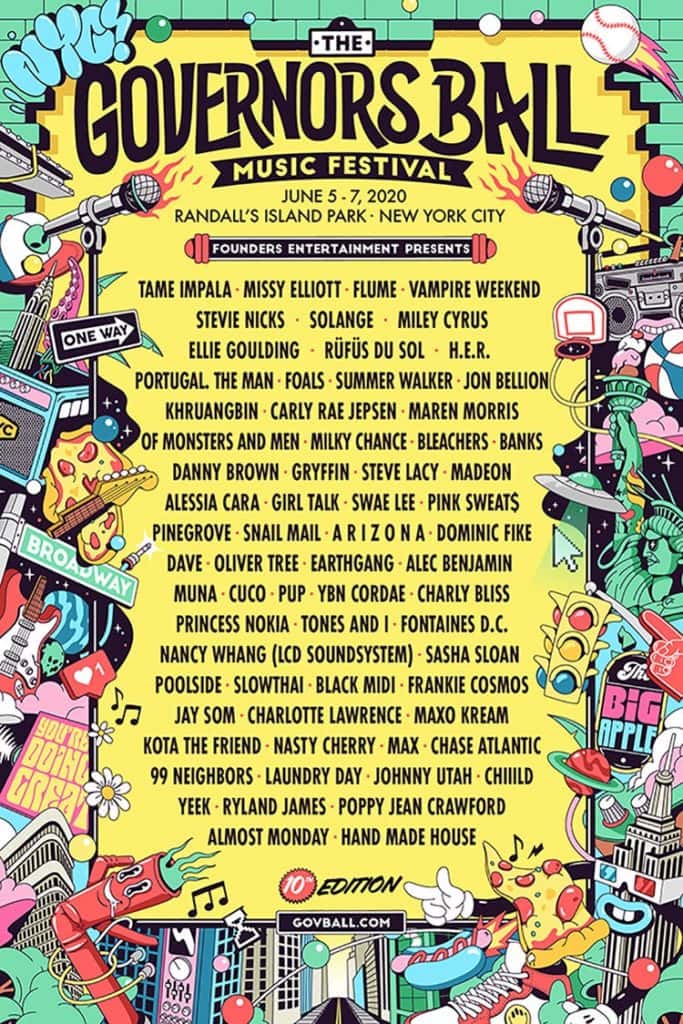 The upcoming 10th edition of the Governors Ball Music Festival marks a major milestone for an event that originated as a shared pipe-dream between New Yorkers in their early 20s who wanted to see their city play host to a music festival on par with the world’s best live music events. Beginning modestly as a one-day inaugural affair in 2011, Governors Ball has grown into a weekend-long annual tradition enjoyed by music fans from around North America and the world at large. Deemed “A Festival With A New York Heart” by The New York Times, Governors Ball’s continued success in the most competitive entertainment market in the country is a testament to the incredible job the small but mighty team at Founders Entertainment have done in bringing a world-class music festival to their own back-yard.

Over the years the festival has hosted hundreds of thousands of fans, and seen an eclectic array of artists take the stage. It has become a right of passage for music lovers on the east coast, with many having grown up attending the festival each year as an official kickoff to summer. It speaks to Governors Ball’s longevity and impact as well, that some of today’s biggest artists like Halsey and King Princess first attended the fest as ticket buyers years before taking the stage at the festival to perform themselves.

Governors Ball At 10 Years – A Retrospective

Described as “a true melting pot of cultures, styles and sounds” by Variety, the crowds, sights, delicious eats found each year at Governors Ball are emblematic of the great city the festival calls home. The 2020 edition will again feature a signature lineup of the best food NYC has to offer, as well as craft cocktails, beer, lawn games, surprise pop-up performances from subway and street performers, eye-catching art installations, and more.

Throughout Governors Ball’s history, Founders Entertainment has strived to provide a thoroughly positive experience for attendees. As part of that commitment, for the 2020 event Governors Ball recently announced upgrades to VIP programming, festival site and experience improvements, and a new age policy requiring persons under 18 years of age to attend with an adult aged 21 or older. visit GovBall.com/newagepolicy and GovBall.com/vipexperience for details on the new age policy and VIP programming respectively

Of Monsters and Men