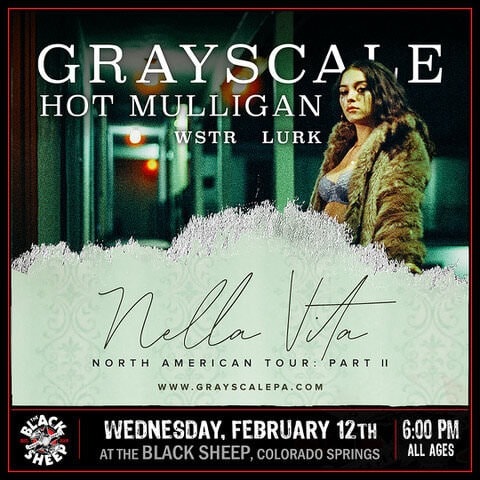 Grayscale recently kicked off their Nella Vita North American tour in support of their latest full-length album of the same name. They’ll be hitting Colorado Springs, CO at The Black Sheep on Wednesday, February 12th alongside Hot Mulligan, WSTR and LURK for a show that you can’t miss!

Grayscale’s current run of tour dates follows Par I of the Nella Vita tour, which took place last fall. Fans can expect to hear plenty of new music, with some older favorite tunes peppered in at the upcoming show.

“It’s really personal,” said frontman Collin Walsh, when speaking about the band’s new album. “The music provokes a lot of visuals, because it’s very conversational, real, and romantic. I suppose that’s just how I write. The songs capture the spectrum of emotions that you experience in life and real experiences like love, sex, being a teenager, addiction, pain, joy, grief, death, and everything. Life isn’t just one thing; neither is music. We’re a rock band, but we want people to dance, laugh, cry, and have fun.”