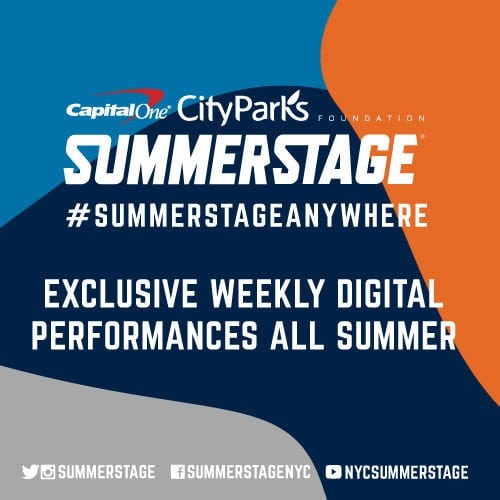 The series will debut on June 6 with MAX performing a love letter to New York. Called a “Young Pop God” by GQ, MAX was named a “top popstar to watch” by Billboard and was nominated for “Best New Pop Artist” at the 2019 iHeartRadio Music Awards. The Billboard top-pop star’s double platinum hit single “Lights Down Low” earned half a billion streams globally.

On June 19, SummerStage Anywhere will celebrate the 155th anniversary of Juneteenth, the nationally celebrated commemoration of the end of slavery in the United States, with a digital day of dance. Tribute performances will be presented on SummerStage’s Instagram channel culminating in a performance on SummerStage’s YouTube channel, featuring Jamel Gaines’ Creative Outlet Dance Theatre and poet Carl Hancock Rux, and a panel discussion led by Executive Artistic Director of The Billie Holiday Theatre, Dr. Indira Etwaroo.

Following June, SummerStage Anywhere will be home to a one-of-a-kind digital content series highlighting genres that were born in or deeply represent New York — hip hop, salsa, jazz, global, indie, contemporary dance. The summer series will include weekly content segments including interviews with and performances by iconic artists, neighborhood tours with artists, and arts engagement for youth. For a full schedule of upcoming programming, please visit summerstageanywhere.org.

“We are really excited to bring SummerStage to audiences at home through SummerStage Anywhere,” shares Heather Lubov, Executive Director of City Parks Foundation. “The arts have been critical during this time of sheltering at home, serving both as a respite and as an important outlet for expression and creativity. And, of course, our city’s parks remain some of the only public resources available for respite as we shelter at home. Both parks and arts create community, and that’s what we need most right now, even if we remain socially distant. So we are hard at work to make sure we can still deliver SummerStage to you, anywhere, while we look forward to gathering together in parks again soon.”

“SummerStage artists purposefully reflect the communities we serve, celebrating the great history and diversity of NYC culture — something that we are very proud of year after year,” shared SummerStage’s Executive Artistic Director Erika Elliott. “Through SummerStage Anywhere, we will be able to showcase a uniquely New York City festival experience, authentically rooted in the neighborhoods in which our shows are typically held while curated for a far-reaching global audience. We are excited about this opportunity and look forward to bringing you SummerStage Anywhere.”

For ongoing updates on SummerStage Anywhere as well as SummerStage programs, please continue to visit summerstageanywhere.org

As an independent, non-profit organization, we rely on our donors to help us make SummerStage possible. Support from donors will help secure the future of SummerStage as New York’s largest free outdoor performing arts festival. We believe the arts are for everyone and encourage those who can donate to visit cityparksfoundation.org/give for more information.

Generous private support is provided by The Thompson Family Foundation, Howard Gilman Foundation, Mertz Gilmore Foundation, The Shubert Organization, and the New York Community Trust NYC COVID-19 Response and Impact Fund. SummerStage is also supported, in part, by public funds from the NYC Department of Cultural Affairs, the NYS Council on the Arts with the support of Governor Andrew M. Cuomo and the NYS Legislature, and the National Endowment for the Arts. Additional support is generously provided by our dedicated SummerStage Members.

In all of its programming and activities, City Parks Foundation partners with the New York City Department of Parks & Recreation to improve neighborhood parks and the communities they serve.