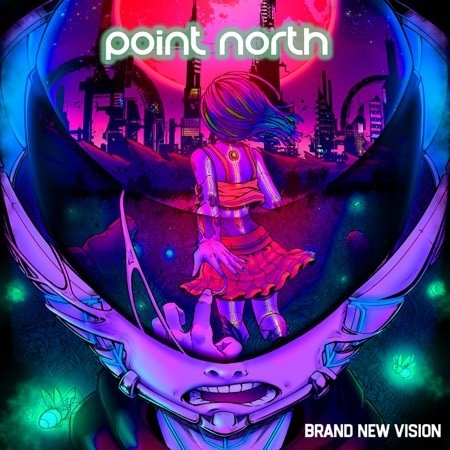 Alternative rock band Point North has announced that their debut album, Brand New Vision, will be released August 21, 2020 via Hopeless Records. With Brand New Vision, Point North embraces an alternate reality that celebrates a break from predictability and normalcy for a world that is uncomfortable, a world that has meaning, a world in color – a place to feel something. Fans can preorder the upcoming album at smarturl.it/brandnewvision

To celebrate the announcement, Point North has shared a new single and video from the upcoming album, “Brand New Vision (ft. DE’WAYNE)” out today on the Hopeless Records YouTube channel. On the new single the band shares, “We are so excited to release “Brand New Vision”. This song was written almost a year ago and seems like it’s needed now more than ever. The song is about seeing the dark in the world and having the courage to do something about it while inspiring others to do the same. We were also lucky enough to include our friend, DE’WAYNE as a feature on the track. His take on the message was beautiful and we were so happy with how it turned out. We hope this song brings some hope and joy to anyone who listens!” Check out the new video now below.

Brand New Vision opens with the title track “Brand New Vision” (featuring DE’WAYNE) and the introduction of Drax, the sentient being that we will be following on our journey through this world. Through Drax’s eyes and singer/producer, Jon Lundin’s honest, raw, and fragile vocals, Point North illuminates the landscape with big instrumentation, massive energy, and an earnest optimism that sets the tone for the songs to come. With roots in pop and hip hop to punk rock and even heavy metal, Point North has crafted an entirely unique sound that seamlessly layers big anthemic rock with pop hooks and soulfully vulnerable vocals.

Self-produced by Jon Lundin and Point North, Brand New Vision is the album Point North have waited their entire lives to release. Devoid of crazy metaphors or poetry, Brand New Vision is human, honest, vulnerable, and aspirational. As the band asserts, “If we can inspire one person to exert some good into this world, we have done our jobs.”