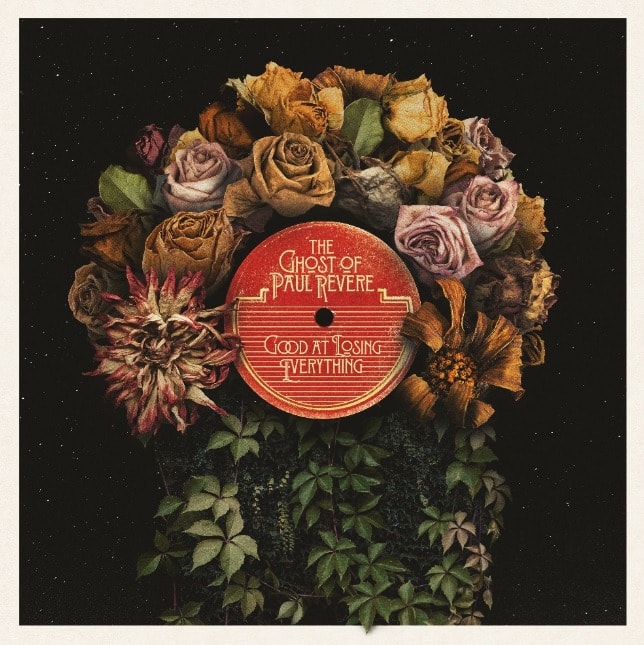 Holler folk trio The Ghost of Paul Revere have announced their third full-length studio album, Good At Losing Everything, will be out on August 28. The 12 track LP is available for pre-order now and features lead single “Love At Your Convenience“. Click HERE to pre-order or pre-save the album – CD/Vinyl pre-orders can be placed HERE. Full track listing can be found below, and fans can purchase limited edition merch bundles that will include a lunchbox, mug, tote bag and slipmat – click HERE and find more info below. The band also recently headlined a string of popular drive-in shows along the East Coast, as a way for the band to continue fostering camaraderie and connect with fans in a safe way, and you can catch them at the Yarmouth, MA Drive-In in Cape Cod up next (all upcoming appearance dates can be found below).

The band is also excited to give fans an all-access pass to the world of The Ghost of Paul Revere with the launch of their new subscription-based fan club. Fans can sign up on Patreon for access to exclusive video and audio content, behind-the-scenes footage, merch discounts and raffles, Q&As, livestreams, early access to tickets, and more. Tiers start at $5/month, and for $15/month subscribers will get an early digital download of the album, as well as a discount on all album merch and merch bundles. Click HERE for more information.

Aiming to create a sense of community with their music, The Ghost of Paul Revere examine life’s ebbs and flows through a distinct and dynamic distillation of folk, bluegrass, rock, and alternative music on the new album. The collection finds the Maine-based band firing on all cylinders as they explore themes of triumph, loss, satisfaction, heartbreak and love. It’s an album that’s fueled by shimmering piano, sweeping guitar, soaring harmonies and punctuated by unrestrained rock ambition. As the band widens their creative palette and expands their sound, Good At Losing Everything attracts an even bigger community, while bringing the inner circle of longtime fans closer than ever. While this marks their third record with engineer and producer Jonathan Wyman, it would be their first collaboration with friend, producer, and co-writer Spencer Albee. The Maine trio [Max Davis (vocals, banjo), Sean McCarthy (vocals, bass) and Griffin Sherry (vocals, guitar)] also welcomed new members, drummer Chuck Gagne and multi-instrumentalist Jackson Kincheloe, as well as pianist Ben Cosgrove, into the fold to record.

Since forming in 2011, the band has created a following that has propelled them from a local to a national level, tallying 15 million+ independent streams to date. After releasing the EP North in 2012, their signature style progressed over the course of two full-length albums- Believe (2014) and Monarch(2017)-and a pair of EPs-Field Notes, Vol. 1 (2015) and Field Notes, Vol. 2 (2019). They’ve performed alongside The Avett Brothers, Jason Isbell, The Revivalists, Bela Fleck, and The Infamous Stringdusters, sold out countless gigs, appeared at major festivals nationwide: Newport Folk, Austin City Limits, Winter WonderGrass, BottleRock Napa, Shaky Knees, Okeechobee, and Voodoo Music + Arts Experience, and garnered critical acclaim from the likes of Billboard, American Songwriter, Relix, Boston Globe, AXS, No Depression and The Boot, who appropriately dubbed them, “not quite bluegrass, not quite country, not quite rock ‘n’ roll, but kind of all three combined.”

The band took home “Best in Maine” at the New England Music Awards twice, in 2015 and 2019. In 2019, their song, “Ballad Of The 20th Maine”, became the Official State Ballad of Maine after being passed unanimously by the Senate and House of Representatives and signed into law by Maine’s Governor, Janet Mills.

Their annual festival, Ghostland, celebrates Maine with good music and great food. This year’s Ghostland Festival has been postponed to Labor Day Weekend, September 3rd and 4th, 2021, and will feature performances from The Ghost of Paul Revere, Deer Tick, The Mallett Brothers Band, and Bell Systems.