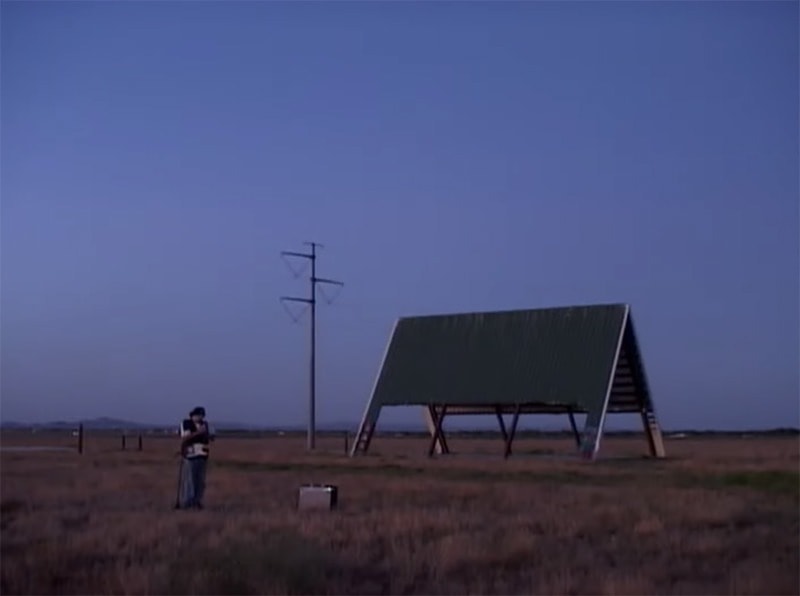 While the EP captures an internal journey, the film adds a compelling geographic component to Manos’ sojourn, following him to a variety of locations in Lancaster, CA – a town located 70 miles north of downtown Los Angeles in the Antelope Valley region of the western Mojave Desert. While bisected by a freeway, the area still abounds with rugged, open spaces. Over the decades, it has drawn a long succession of fearless dreamers – from Southern Pacific railroad workers to gold and borax miners to flight test pilots like Chuck Yaeger, Space Shuttle crews and solar energy pioneers.

Manos performs the opening song, “At Night,” in darkness, illuminated simply by the lights of a nearby gas station. As he accompanies himself on electric guitar, traffic from the nearby freeway whooshes by and travelers pull up to the pumps. From there, he ventures into the daylight, trading off between acoustic and electric guitars and keyboards, in a variety of natural settings. Short audio interludes – voice memo recordings that capture some of the dialogue between his small group of crew, friends and family – are sprinkled between his solitary performances. The day passes and by the time Manos performs the closing song – “Do You Turn Red?” – he is once again engulfed in darkness.

PETER MANOS:
I’ve always wanted to make something a little longer form. My friend Jason and I talked about this idea for a long time and how we felt like the music would lend itself to it. We wanted it to be raw and intimate so just a couple of us went out there. There wasn’t a strict artistic direction. It was more of just a feeling we wanted to grab, which is definitely different for me. We threw a handful of photos on an are.na channel (mood boards, etc.), chose an order for songs, and really just planned to shoot and record as much as we could.

We wanted vast fields, greenery and hills, so Antelope Valley felt like the perfect spot. We just kind of drove around and found locations that felt right for the moment. We’d park the car, bring a football, and go up there and shoot. It was real relaxed and just really fun. A very special time.

I was playing a barbarossa, which is a handmade guitar I found at this vintage guitar store. It’s my favorite guitar. I was also playing a Martin 000-15m, which I got in high school after selling basically everything I owned. And then also a Sunburst Fender telecaster that I also got for Christmas when I was younger. We also used my blond Wurlitzer, which is a prized possession.

We recorded vocals and guitars on a field recorder, so it would sound the way we wanted it to. It would pick up all of the little atmospheric sounds like wind and footsteps and also cars and everything else. The man talking in the second transition is an Uber driver. He was telling my brother and I about how he used to run a radio station. It was fascinating. Nice guy.

ADRIAN MARTINEZ:
For months leading up to the project, we kept going over the idea of a stripped down, long-form live performance shot in natural environments. As we actually approached the shoot day, we had a plan and location in mind for each song, but we didn’t have a particular shot list since we were shooting in places we had previously only seen in photographs — not at all how we usually do this.

In an out take scene, we were at a beautiful park called Vazquez Rocks. Our friend Christian pulled up his Jeep to the edge of the parking lot and plugged in a 60 ft. extension cord. running through dirt and bushes leading up to a beautiful Wurlitzer with Peter sitting behind it. A few minutes later, a park ranger kindly asked us to take the piano out of his national park. So, we did. We soon found the fork in the road, which became the second scene in our final live piece. As with any production, we were expecting things like this to happen. We just had such a good feeling about what we were looking to achieve, and we just kept going. It’s really crazy to think that we shot this all in a single day. But I’m really happy with the outcome because I feel that people will get an authentic look at who Peter is.