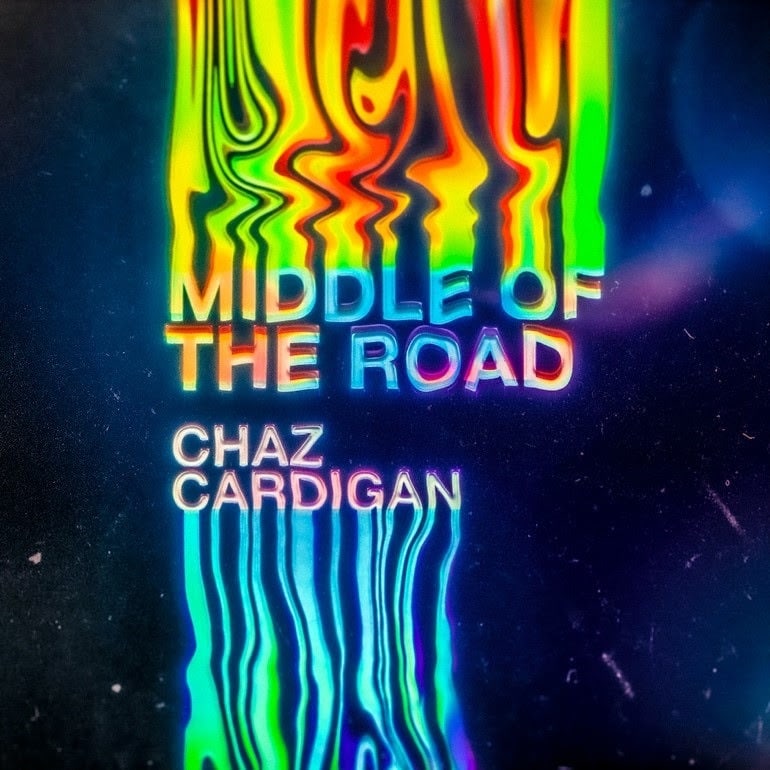 After a quick look in the rearview mirror, Chaz Cardigan hits the accelerator in his anthemic, future-facing new single, “Middle of the Road.” Chaz wrote the song with producers Simon Oscroft (Dreamers, The Naked And Famous) and Dan Book (lovelytheband, 5 Seconds of Summer, All Time Low).

“‘Middle of the Road’ came from ruminating on what my life would’ve been like if I’d stayed in my hometown,” says Chaz Cardigan, who is from the small central-Kentucky city of Elizabethtown. “I realized I would’ve been miserable, stuck in a cycle of debt and probably addicted to something, pretending to be someone I’m not for the rest of my life.”

With the arrival of his acclaimed 2020 EP Vulnerabilia, Chaz proved his talent for turning his deepest insecurities into wildly cathartic pop songs. Featuring his smash single “Not OK!” – a top 20 hit at Alternative radio – Vulnerabilia found Chaz opening up about his panic disorder while also building a high-energy but beautifully nuanced sound. His follow-up single, “S.O.S.,” was recently named as one of “The 25 Best Songs By LGBTQ Artists In 2020 (So Far)” by Billboard.

With “Middle of the Road” and “Everything’s Wrong,” Chaz shows remarkable growth in both his life and his music. Flaunt said, “‘Everything’s Wrong’ speaks volumes to the current state of the world. The message: a bad day is never the end of the story.” Billboard noted, “‘Everything’s Wrong’ is Cardigan’s musical declaration that things are messy, and he’s perfectly happy with that.” The song appeared on such playlists as Spotify’s New Music Friday and Ones To Watch #NowWatching Weekly.

He is seen as a 3D model, coming to life, in the official video for “Everything’s Wrong.” Working remotely due to COVID-19, Chaz scanned himself using the AR app Scandy Pro and director Haoyan of America (Crumb, Cautious Clay) took it from there. View HERE. The clip was the first in a series of four videos. Look for Chaz’s evolution to continue with the “Middle of the Road” video, due out later this month.

Chaz’s new material showcases the eclectic musicality he first began honing as a kid in Elizabethtown, Kentucky. A classically trained pianist who taught himself to play guitar, bass, and drums, he got his start gigging in punk bands at the age of 11, covered classic songs in Louisville bars during his high-school years, and later produced in a Nashville hip-hop collective. After releasing his debut album, I, Chaz put out a series of singles that all ended up on Spotify’s New Music Friday playlist – a triumph that soon earned him the distinction of becoming the first artist jointly signed to Capitol Records and Loud Robot, which is the record label from J.J. Abrams’ production company, Bad Robot.