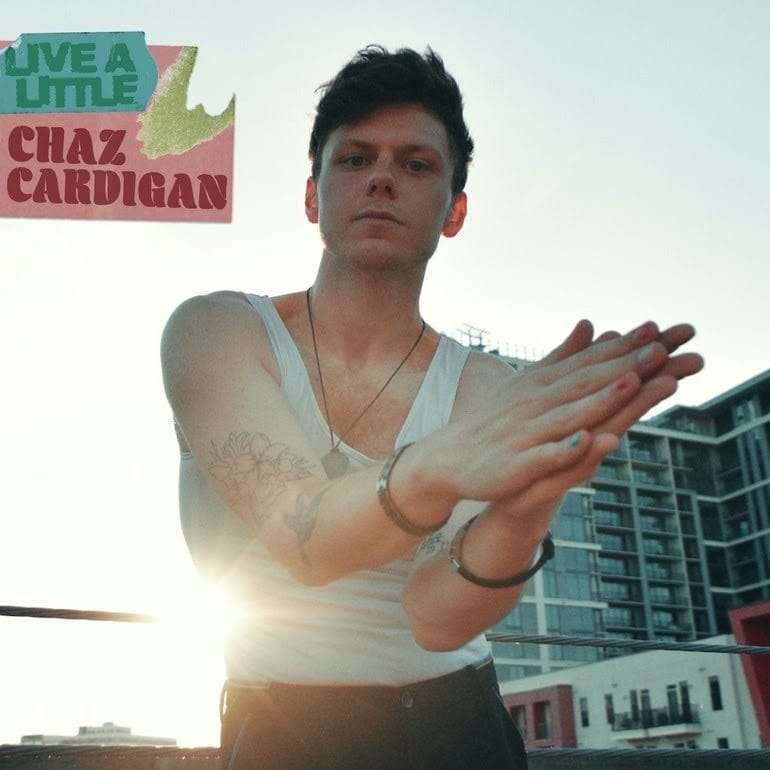 Combining punk energy with an irrepressible pop sensibility, Chaz Cardigan has returned with the infectious, life-affirming anthem “Live A Little.” After a nod to Planet Earth’s “8 billion people that feel alone,” Chaz offers up an alternative to despair: “you’ve gotta wake up every morning/see the day is a gift/you gotta check that bucket list/before you go to the crypt…you gotta live a little bit.” He wrote and recorded the song with 30 Seconds To Mars touring member Stevie Aiello, who also produced, and Better Than Ezra’s Kevin Griffin.

“Live A Little” is heard in the promotional campaign for “Tiny World,” a new Apple TV Plus documentary series that premieres October 2. Narrated by Paul Rudd, the show aims to look at the world through the eyes of the tiniest creatures and witness the extraordinary things they do to survive. View the “Tiny World” promo spot HERE.

“I write a lot about nuance, grey in-betweens; and ‘Live A Little’ is just straightforward and fun. It’s a great big golden retriever of a song, I want it to feel like a hug from a friend you haven’t seen in a long time,” says Chaz. “It’s cool to see it find a home in the promo spot for Tiny World! I’m a total junkie for nature documentaries, and it makes me really happy to think the song is attached to a show that could really inspire kids and adults to look a little closer at the world around us.”

The new song follows Chaz’s pair of summer singles – “Middle of the Road” and “Everything’s Wrong.” Flaunt said, “[‘Everything’s Wrong’] speaks volumes to the current state of the world. The message: a bad day is never the end of the story.” Billboard noted, “‘Everything’s Wrong’ is Cardigan’s musical declaration that things are messy, and he’s perfectly happy with that.” “The dance worthy, infectious, and fun track [‘Middle of the Road’] is the perfect anthem to blast, windows down, as we ride out the rest of the summer,” said Play Too Much. Q Review observed, “Chaz keeps delivering thoughtful music of strong perspective, sincere reflection and authentic honesty wrapped in sonic kick ass and punch.”

The surrealistic accompanying videos, produced by Haoyan of America (Crumb, Cautious Clay), are based on a 3D model of Chaz. Created using photogrammetry in a virtual environment, the 3D figure was brought to life in the first video, “Everything’s Wrong,” and continues his journey in “Middle of the Road,” a song that examines how choices made in the past set one’s future in motion.

Chaz has made some bold choices in his life – including the decision to move from his hometown of Elizabethtown, KY to Nashville when he was only 17. With the arrival of his acclaimed EP Vulnerabilia in early 2020, Chaz proved his talent for turning his deepest insecurities into wildly cathartic pop songs. Featuring the smash single “Not OK!” – a top 20 hit at Alternative radio – Vulnerabilia found Chaz opening up about his panic disorder while also building a high-energy but beautifully nuanced sound. His follow-up single, “S.O.S.,” was recently named as one of “The 25 Best Songs By LGBTQ Artists In 2020 (So Far)” by Billboard.

A classically trained pianist who taught himself to play guitar, bass, and drums, he got his start gigging in punk bands at the age of 11, covered classic songs in Louisville bars during his high-school years, and later produced in a Nashville hip-hop collective. After releasing his debut album, I, Chaz put out a series of singles that all ended up on Spotify’s New Music Friday playlist – a triumph that soon earned him the distinction of becoming the first artist jointly signed to Capitol Records and Loud Robot, which is the record label from J.J. Abrams’ production company, Bad Robot.