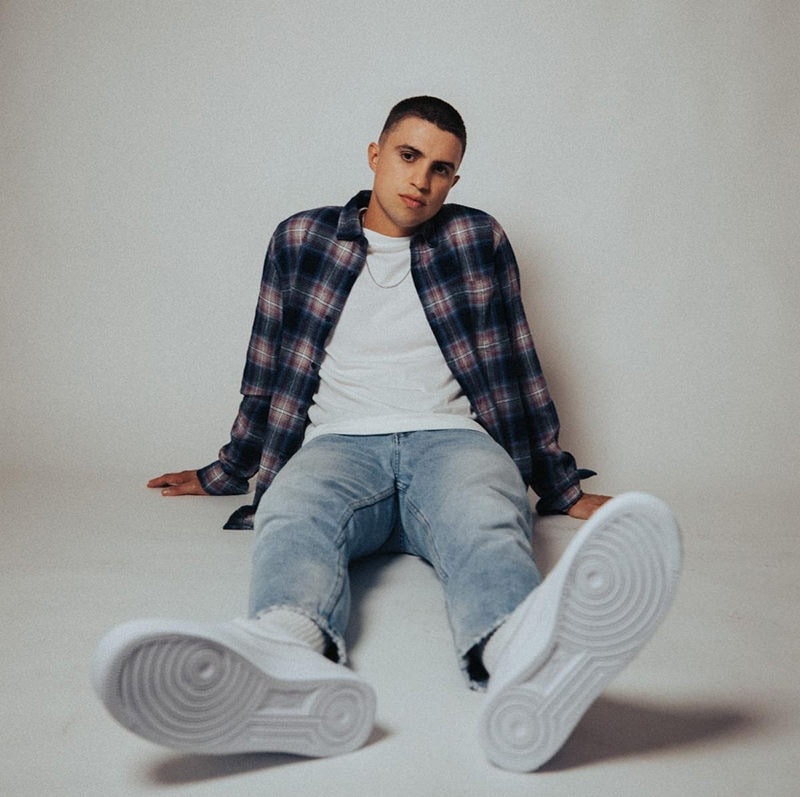 Alt-pop act Kyd the Band (aka Devin Guisande) invites you on a trip into his mind with the official video for hypnotic new single “Corridors.” Lifted from his upcoming EP, the new song – co-written with Adam Friedman (Allen Stone, Mike Posner) and Kevin Griffin (The Night Game, Moon Taxi) – continues to paint a vivid picture of his ever-evolving self and beautifully marries up the embodiment of previously released EPs Season 1: The Intro and Season 2: Character Development. Season 3: The Realization is due out this October via Sony Music.

“It’s like a prison in my head, some days I can’t get out of bed…” croons Guisande on the all too relatable intro of the track. Throughout “Corridors” Guisande tries to break free of his mental prison to finally overcome past relationships. Instead of remaining trapped in old memories and endless brain loops, the song encourages to keep your head up and positively push forward against the odds. The new single is just another example of Kyd the Band’s unabashed honesty in his lyrics and broad range across his collection. With each season, Devin reveals more of himself as he finds the confidence to delve deep into his tumultuous past from a socially isolated childhood, to leaving his home and family; overcoming a drug overdose to then finally finding solace in music and healthy relationships.

Speaking about the new track, Guisande says, “I’m excited because sonically it’s the product of where I’ve been up until now merged with my first two EPs. Lyrically, it’s about realizing there are spaces in my mind I’ve created for people who have hurt me, specifically from my upbringing and formative years. It’s the starting point for the message of identity and self-acceptance, the intro to Season 3: The Realization.” On the video, he elaborates, “My intention with this video was to convey an experience that I had as a teenager, in the church that I was raised in, that has stuck with me ever since. It’s stuck with me to the point where I’ve created a permanent place for it and that person in my mind, and I relive it over and over again.”

Kyd the Band’s music is ultimately an ideal soundtrack to finding your place in an often-chaotic world and likewise the artist hopes that his music creates an intimate connection with his audience. “With everything I write, I try to write directly from my life and what’s in my heart,” says Guisande. “I’d love for my music to reach all the kids like me, who are maybe questioning what they were raised to believe or feel like they haven’t found where they belong just yet. I hope those kinds of people hear what I have to say, and see a bit of their own story in my songs.” On the video, he elaborates, “My intention with this video was to convey an experience that I had as a teenager, in the church that I was raised in, that has stuck with me ever since. It’s stuck with me to the point where I’ve created a permanent place for it and that person in my mind, and I relive it over and over again.”

The Nashville-based and Sacramento-raised singer-songwriter didn’t fail to impress with his spellbinding Season 2: Character Development EP (released on May 29, 2020 via Sony Music). The 6-track collection included “Heartbreak Anthem” – his collaboration with gnash which landed on over 15 New Music Friday playlists including Spotify’s New Music Friday (US). Season 2: Character Development EP followed on from Kyd the Band’s debut EP Season 1: The Intro. At the top of the year, Kyd the Band supported NF as well as Lennon Stella on their huge international tours in addition to his own solo sold out hometown show. With three years on the scene, he’s also gained support from MTV’s TRL / Fresh Out host Kevan Kenney and press coverage from American Songwriter, Clash, Complex, Culture Collide, Earmilk, Flaunt, Forbes, House Of Solo, Noctis Magazine, Notion, Ones To Watch, and more. A deft songwriter, Devin has penned tracks for artists as eclectic as hip-hop legends Bone Thugs-N-Harmony and German DJ Robin Schulz as well as gnash, NF, and ROZES. Channeling his experiences and lessons learned into his work, Kyd the Band’s music radiates a hard-won positivity that inspires anyone to live more boldly.

Born into a Filipino/Spanish family closely involved with the Pentecostal Church, Guisande got his start playing drums at the age of ten and later took up piano and guitar. At age 16 he co-founded a band with his guitar-playing brother Kyle and began writing songs of his own, relying almost entirely on instinct rather than mining influence from other artists (“I didn’t even know who Kanye West was till I was 18,” notes Guisande, who was forbidden to watch movies or listen to secular music). Over the next few years, Guisande experienced a life-changing transformation as he left the church he was raised in and moved away from home. “I’d thought I was going to be a preacher when I got older, but I started questioning everything and just completely changed the whole trajectory of my life,” he says.

With a batch of self-recorded songs under his belt, Guisande headed to Los Angeles at age 19 and fully devoted himself to pushing forward with his music career. But while his non-stop hustle scored him meetings with a number of industry heavyweights, he felt increasingly disillusioned by the L.A. scene and decamped to Nashville in 2013. When his brother followed him to Tennessee a year later, the two resumed the musical partnership they’d formed as teenagers. Too broke to afford beds, the siblings shared an apartment and slept on the floor, working full-time jobs all day and spending every night writing songs. Against the odds, the multi-instrumentalist, producer, and songwriter clocked in +40 hours a week while working on music each hour he had left to spare.

After suffering a series of false starts, the duo linked up with DJ/producer and frequent Scott Storch-collaborator Avedon, who enlisted their songwriting talents for the 2017 comeback album from Bone Thugs-N-Harmony. It was his time in the studio as a songwriter that shaped his now solo career and gave way for his first support slot on tour with NF under the Kyd the Band moniker. Fast forward 2 years, Kyd the Band’s debut single “American Dreamer” has amassed over 3 million streams independently while his slew of major label releases (sans Kyle who left the band amicably in 2017) landed him on playlists like Apple Music’s ‘Best of the Week’ and ‘The A-List: Pop’ numerous times. Racking up over 12 million collective streams, the 2019 single “Easy” was one of the most played tracks on German radio that year and landed Kyd the Band on the cover of Spotify’s official ‘Swag’ playlist.

Kyd the Band isn’t tied to one genre – the message behind his lyrics is what he hopes fans can learn from or relate to. It’s no surprise his collection thus far has fans drawing comparisons to Twenty One Pilots or The Neighborhood. “This next wave of music is definitely less indie leaning, but I’d argue that no matter what Kyd the Band song comes out you’re always going to hear a consistent thread in the lyrics and in the grittiness of the music. I think artists should have the right to evolve, and that they shouldn’t pass up the opportunity to evolve.” Offering a sound that is fresh, unique, and compelling, Kyd the Band is guaranteed to elicit excitement and enthusiasm across a diverse array of audiences.