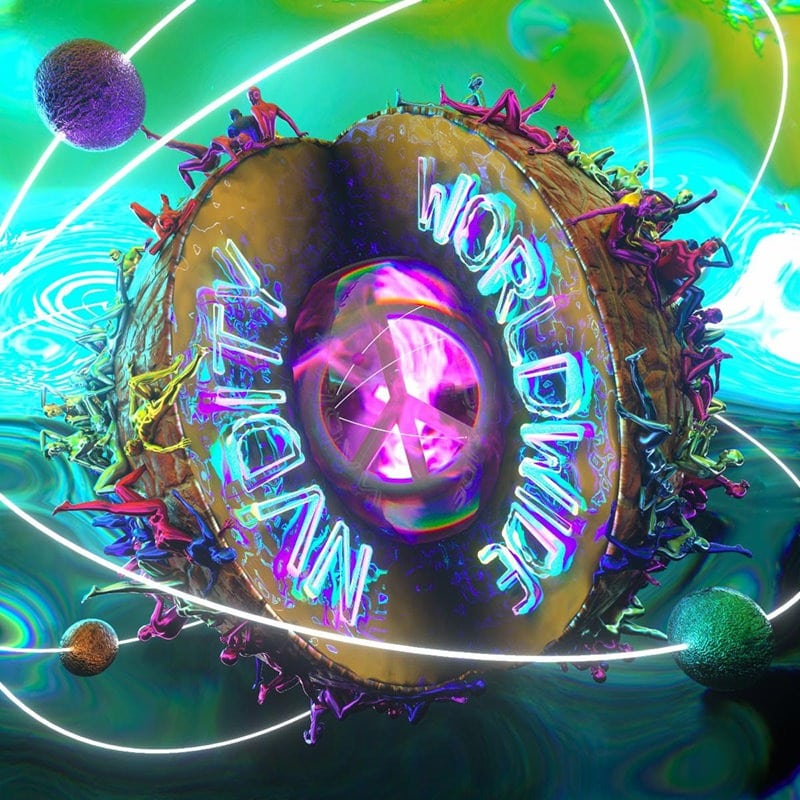 You may not recognize NVDES at first, but millions have had his music buzzing in their ears – whether it was “Purusha” in the official Apple iPhone SE launch this year, “Brazooka” in the official Apple iPhone 11 advertisement the year prior, “Rock & Roll” on the Need for Speed™ Heat soundtrack, or his smash hit collabs like “Everybody Wants To Be Loved” with Yoke Lore and “Running” with Oliver Tree. The title track off his album NVDITY WORLDWIDE (released today via VIBE NATION) is currently featured in a massive global ad campaign for Apple Music / Apple Music Radio featuring Billie Eilish, Orville Peck, Megan Thee Stallion, Anderson .Paak, and more.

The second full-length album from NVDES – the shapeshifting musical universe of artist/producer Josh Ocean – NVDITY WORLDWIDE was sparked from a daybreak epiphany on the streets of Berlin. “I’d been out all night and had a sudden inspiration to create something where I’d collaborate with artists from around the world,” says Ocean. “The idea was that each collaboration would be a different antenna point, and together they’d raise the vibrational frequency of the planet. The whole essence of NVDES has always been about me channeling energy, but now I feel like I’ve figured out how to really focus that and positively affect people.”

Made with a dozen collaborators from across the globe – including Whethan, Tommy Cash, filous, Florence Arman (fka klei), BLVTH, and more – NVDITY WORLDWIDE expands on the explosive originality and frenetic momentum of NVDES’ 2018 full-length debut Vibe City Utah. Built on a sonic aesthetic Ocean calls “laptop punk,” the album unfolds in 10 exhilarating tracks brought to life with deep intentionality.

“When I’m in the studio, my role is to capture the energy that’s happening in the moment, and then do my best to share that with the listener in the rawest form possible,” says Ocean. “I look at how transformative music can be – going back to early humans banging on drums and dancing around the fire – and I want to do what I can to empower people the same way, and hopefully inspire them to follow their own creativity.”


While the wildly volatile beats of NVDITY WORLDWIDE hit on a near-primal level, the album contains many finely layered messages of love and unity within its kaleidoscopic sound design. After opening on the divine chaos of the title track, NVDES shifts into “Born 2 Love,” a hauntingly poignant song delivered in Korean by Ocean’s close friend and co-writer Se Hee Wee. “‘Born 2 Love’ came from us having a conversation about homelessness in L.A., and wanting to lift people up so they don’t have to live that way anymore,” says Ocean. “Se Hee Wee had never sung before in her life but she ended up doing the vocals on it, and I think she sang it beautifully.”

Another charmed moment on NVDITY WORLDWIDE, “Love in Any Language” emerges as a breezy pop confection made even sweeter by klei’s bilingual vocal performance. “That song started out as something I wrote with my wife a couple years ago, about the idea that love knows no language,” Ocean points out. “It ended up becoming a collaboration with people all over the world – France, Austria, England, and America, with words in English and Spanish – which felt like a really powerful experience to include.” Later on the album, NVDES presents “Green” – a piano-laced track featuring the tremendously moving vocals of Nilo: a ten-year-old Dutch boy whose dad is one of Ocean’s best friends. “I was in Amsterdam last year playing a show, and my friend gave me this freestyle rap his son had done,” Ocean recalls. “I was totally blown away by it – it’s this young kid talking about his connection to the color green and how much he loves the planet, and so I asked Nilo if he’d let me produce it. I’m so excited to share it on the album, because how often do we get to hear kids expressing themselves through music like that?” The video (directed by Superorganism’s Robert Strange) is a vibrant call to action for not only our generation but generations to come. The lyrics, while straightforward in its delivery, work in tandem with the video to offer up the sentiment that you can be bold in this critical fight at any age.

Unconventional as Nilo’s guest spot might be, Ocean’s decision to include him on NVDITY WORLDWIDE is right in line with NVDES’ collaborative philosophy. “Whenever someone comes to work with me, I always encourage them to try something they’ve never done before,” Ocean says. “I created NVDES as a world where people can be free and explore and experiment. It’s meant to be a place for self-discovery – sort of like, ‘Let’s just play and see what happens.’”

True to that playful spirit, the magnificently groovy “24/7” took shape from a spur-of-the-moment session in an Arkansas motel room. “My friend and I were on tour and he mentioned that he wanted to make an Italian disco song,” Ocean explains. “A couple days later we were at a motel in Little Rock and I programmed this disco-house loop and gave him the mic; he started freestyling over the loop and it just took off from there.” On “Juicy,” NVDES joins forces with Whethan for a fantastically breakneck track that Ocean sums up as “a crazy vocal chop of my friend freestyling about getting juice,” while “Lightning Flow” finds him collaborating with Polish/Albanian producer BLVTH for a galvanizing anthem about the glorious rush of inspiration. And on “Purusha” – recently featured in the iPhone SE launch campaign – NVDES offers up a lushly textured track spawned from his reading of the Bhagavad Gita.

Describing NVDITY WORLDWIDE as a “collection of cool moments that happened all over the world,” Ocean approaches each of NVDES’ projects with the same kinetic imagination he first discovered as a kid. “I started writing songs when I was 12, and from the beginning I was passionate about sharing my own expression instead of playing covers,” says the self-taught musician. Originally from New York, Ocean grew up on punk and began experimenting with self-recording while studying in Hawaii his sophomore year of college. “I got a ukulele and acoustic guitar and started focusing on creating with those instruments on my laptop, at a time when laptop recording wasn’t really a thing,” he says. After a year in Hawaii, Ocean moved to New York City and continued making demos in his apartment, quickly earning enough attention to devote himself to music full-time. Burnt out on New York and dissatisfied with his former musical project, he relocated to L.A. in 2015 and launched NVDES in the studio apartment he nicknamed Vibe City, Utah. With the help of an ever-morphing lineup of musician-friends, NVDES soon drew acclaim with early releases like 2016’s Life with Lobsters EP and 2017’s ‎La NVDITÉ, Vol. 1 and Vol. 2.

Along with amassing an adoring fanbase, NVDES’ has surpassed 30 million collective streams while his fun, honest, and unfiltered releases have reeled in support from Acid Stag, Billboard, Clash, Earmilk, HillyDilly, idolator, Indie Shuffle, Milk.xyz, Office Magazine, PAPER, Refinery29, Stereogum, The FADER, The Line of Best Fit, The Wall Street Journal, Variety, and many more. His progressive outlook and creative prowess has additionally led to massive success with brands like Apple iPhone (5x), Crayola, Google, Macy’s, New Balance, Samsung, T-Mobile, Volkswagen, as well as networks such as ABC, Fox, Freeform, and FX. The appeal lies within NVDES’ dynamic collection, mirroring the artist and producer’s ability to innovate outside the confines of electronic / pop sensibilities and singular genres.

As NVDES’ most ambitious and boldly realized work to date, NVDITY WORLDWIDE owes much of its untamed vitality to Ocean’s incredibly deliberate creative process. “With so much of the music we hear now, people have worked on it for a year or even longer; they’re doing so much editing and fine-tuning every single frequency,” he says. “I’m way more interested in trying to capture the feeling of the exact moment of inspiration – which sounds like a simple thing, but it depends so much on being clear and open when I go to work.” To that end, Ocean has added such practices as transcendental meditation to his daily routine in order to keep the flow of energy as free as possible in the studio. “This is the first album where I was heavily into TM while I was working on it, and now I know that I’m going to continue that practice for the rest of my life,” he notes.

With the release of NVDITY WORLDWIDE, Ocean hopes that NVDES’ potent transmission of energy might produce an impact that goes beyond pure euphoria. “When people hear the album, I want them to feel excited to connect with their own creativity,” he says. “It doesn’t have to be about making music or art or movies – it can mean coming up with a new way to recycle plastic so we can clean up the oceans, or a new approach to urban gardening. I believe everyone is inherently creative, and right now we absolutely need all that creativity to make the world a better place.”