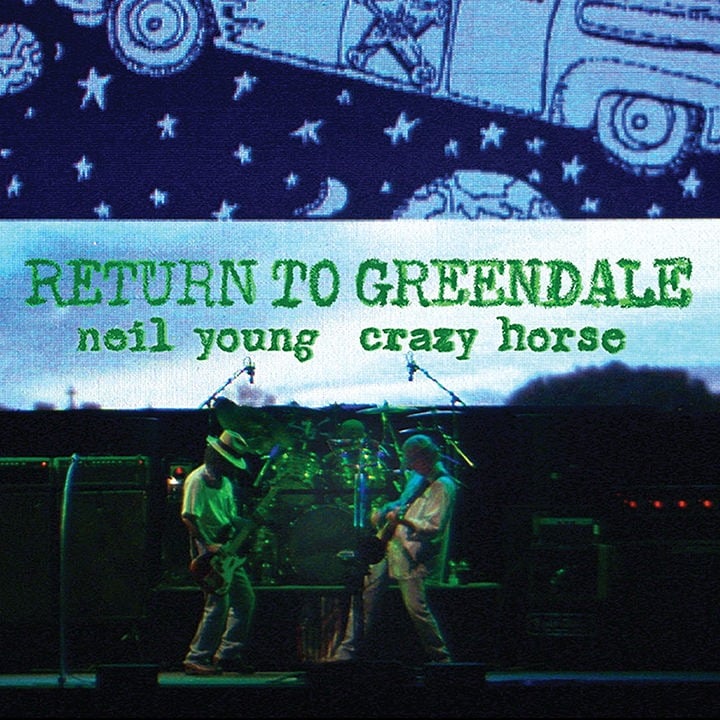 Neil Young has announced the release of Return To Greendale, a live album and concert film of the historic 2003 tour that brought his 25th studio album, Greendale, to life both musically and theatrically. Out November 6 via Reprise Records, the songs and performance remain topical as ever, powered by themes of environmentalism, corruption, and the destructive effects of capitalism. Featuring Young’s trusty partners Crazy Horse, the Toronto recording captures the epic experience of Young’s immersive, small-town rock opera. The multimedia exploit seamlessly blended Young’s powerful lyrics and Crazy Horse’s heavy blues thrash with musical theatre, as actors joined the band onstage to play out Greendale’s narrative as it unfolded. Like Greendale itself, the show eschews elaborate production in favor of a ragged and rough-hewn feel that does right by its source material.

Return to Greendale will be released in several formats. The limited-edition deluxe box set includes a Blu-ray of the full concert, two LPs and two CDs, and a DVD of Inside Greendale, a documentary capturing the making of the album. It will also be available separately on double vinyl, a two-CD set, and digitally on Neil Young Archives (NYA) and at all major DSPs. Inside Greendale features footage of Young and Crazy Horse in the studio, mixed with segments from 2003’s Greendale fictional film. Both Inside Greendale and the concert film are directed by Bernard Shakey and produced by L.A. Johnson (Human Highway, Rust Never Sleeps). Click here to pre-order Return To Greendale.

The story of Greendale follows multiple generations of the Green family as they go about their lives in a fictional California town. Through the perspectives of multiple characters—Grandma, Grandpa, Edith, Earl, the doomed Jed, and eco-warrior Sun Green, among them—Young tells a poignant story about small-town America and the need for immediate action to save the environment. That need, of course, has only become more urgent. On Return to Greendale, the 10 songs from Young’s powerful original album are performed in sequence, with a cast of actors speaking the sung words, adding to the already blistering intensity of the performance.

Return to Greendale is the 16th installment in Young’s Performance Series. Previous installments have covered pivotal live moments from nearly every era of Young’s long-running career, including early acoustic performances and legendary, full-band barn-burners. Labeled “a revolution in fandom” by The Guardian, Neil Young Archives was the first totally immersive fan-experience website and remains the only portal for all things Neil Young.

Return to Greendale track listing for audio and Blu-ray: