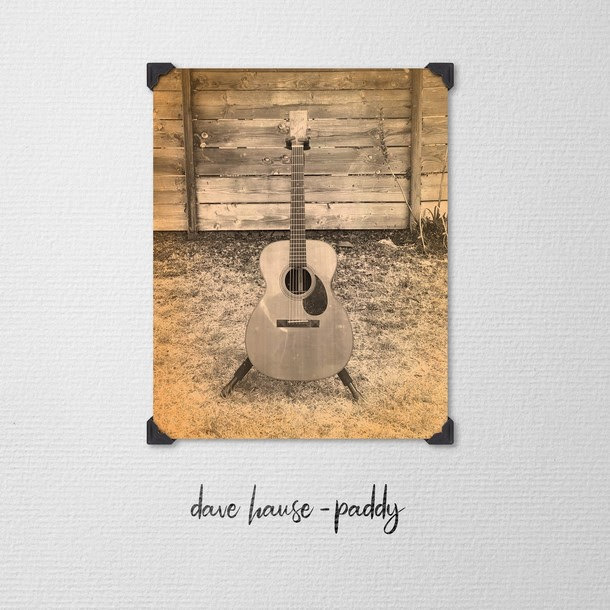 Philly-bred singer-songwriter Dave Hause has released “Doublewhiskeycokenoice,” the latest track to be lifted from the Friday, October 23 release of his two brand new EPs, Patty (pre-order) and Paddy (pre-order). Featuring songwriter Lilly Hiatt, “Doublewhiskeycokenoice” is a punk staple written by Dillinger Four and featured on its 1998 Midwestern Songs Of The Americas album but reworked into a delicate piano-laden offering with Hiatt offering a beautiful and haunting vocal.

“Paddy Costello’s songs always felt like working class anthems, but not in a cheesy, celebratory way, more of a lament of what it actually feels like to work your ass off day in, day out, and still not quite have enough,” Hause says. “When I recorded this version of ‘Doublewhiskeycokenoice’, I wanted to get that feeling of someone plunking around on a piano in a bar late at night when most people have gone home. I don’t hang around bars anymore, and neither does my friend Lilly Hiatt, but we’ve both spent our fair share of time in them. So here it is … two sober people singing about drinking a few of your problems away.”

Reimagining songs by two of his favorite artists, Patty Griffin and Patrick “Paddy” Costello of Dillinger Four, the forthcoming Patty and Paddy EPs feature an array of contributors including Brian Fallon, Will Hoge, Jake Blount, Lilly Hiatt, Laura Stevenson and Bartees Strange. Fascinated by the idea of artists dedicating full records to covering an artist that has shaped their work – Bruce Springsteen’s The Seeger Sessions, Steve Earle made a Townes Van Zandt and a Guy Clark record, the band Discount put out an EP of Billy Bragg covers, etc. – Hause, after careful consideration, decided to create separate collections honoring the work of two songwriters that have inspired his own work.

The Patty and Paddy EPs arrive on the heels of “Your Ghost,” an acclaimed protest song written by Hause about George Floyd, police brutality and white privilege. Created with the help of Grammy-nominated artist Amythyst Kiah and Kam Franklin of The Suffers, the proceeds from the sale of “Your Ghost” on Bandcamp are being donated to the Philadelphia Community Bail Fund. Stream and purchase “Your Ghost” on Bandcamp HERE.

“With the pandemic rolling in and all of our touring plans cancelled, it seemed like a great time to try some home recording, and to do this project that I’ve always wanted to try,” Dave Hause says of his upcoming releases. As diverse as his own personal tastes, the forthcoming Patty and Paddy EPs shine a light on the music of two very different songwriters from two very different genres. When approaching the music of Patty Griffin, Hause’s brother and songwriting partner, Tim Hause, cautioned him early on that trying to record Griffin’s songs the way she recorded them might be too big a hill to climb as Griffin is always able to showcase her singular vocal talent, an attribute that Hause personally admits to not having. Tim suggested maybe trying to record them the way Dave would’ve performed them when he first started to play solo, with an electric guitar and the vocal as the basis for the track. “I’ve loved her songs for so long, and have covered a few of them over the years and turned people on to her work, so I’ve had it in the back of my head for years that I would eventually see this project through,” he says.

Dillinger Four has been a favorite of Dave’s going back to the late-Nineties, and Paddy’s songs in particular always felt like folk anthems for the working class, just played maniacally. “Getting to live inside Paddy’s songs was a big inspiration, and the frustration, humor, sadness and truth that he wrote into those lyrics was cast into a new light when they were played more gently and slowly,” Dave explains. “As we started moving along, we were really enjoying the process, and by virtue of recording songs by both songwriters at the same time, certain parallels emerged,” he continues. “These are two of my favorite songwriters on Earth. I hope we did them proud.”

With a career spanning a decade and four albums, Philly-raised singer-songwriter Dave Hause carries on in the voice and tradition of classic American songwriters by tackling topics of hope, depression, global warming, a crumbling democracy and growing old. His songs have always been a quest for personal survival – about pushing through against the odds – and these complex notions weave together with a joyous sing-along cadence that creates a soundtrack for the broken American dream, as illustrated in his latest work, 2019’s Kick (Rise Records).

Paddy EP track listing:
Minimum Wage Is A Gateway Drug (feat. Jake Blount)
The Father, The Son, and The Homosexual Single Parent
Doublewhiskeycokenoice (feat. Lilly Hiatt)
Super Powers Enable Me To Blend In With Machinery
The Great American Going Out Of Business Sale (feat. Will Hoge)