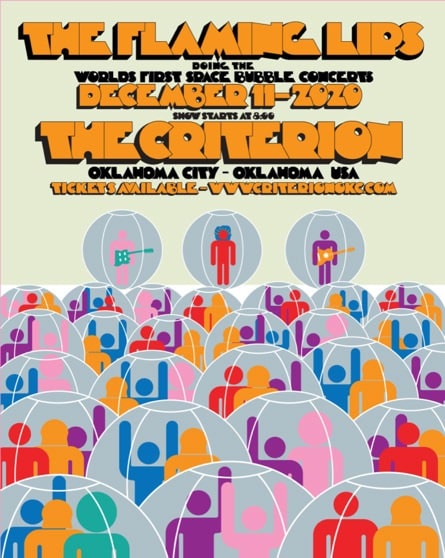 Within minutes of the announcement, The Flaming Lips Space Bubble live concert on December 11th at The Criterion in Oklahoma City has completely sold out. A second show has been added for December 10 and is also expected to sell out immediately.

Tickets for the second show go on sale today at 10:00 AM CT. Go to criterionokc.com to purchase. Local health and safety standards will be strictly observed for this full-production live Lips event. Wayne Coyne has created an instructional video to explain the run of show that will hopefully answer all of your questions. Watch it below.

As previously announced, The Lips have shared a pair of live videos in preparation of these Space Bubble shows, directed by Wayne Coyne and filmed/edited by Blake Studdard for AtriaCreative.co. Click here to view “Brother Eye,” and here for “Assassins Of Youth,” both from their acclaimed new album AMERICAN HEAD.