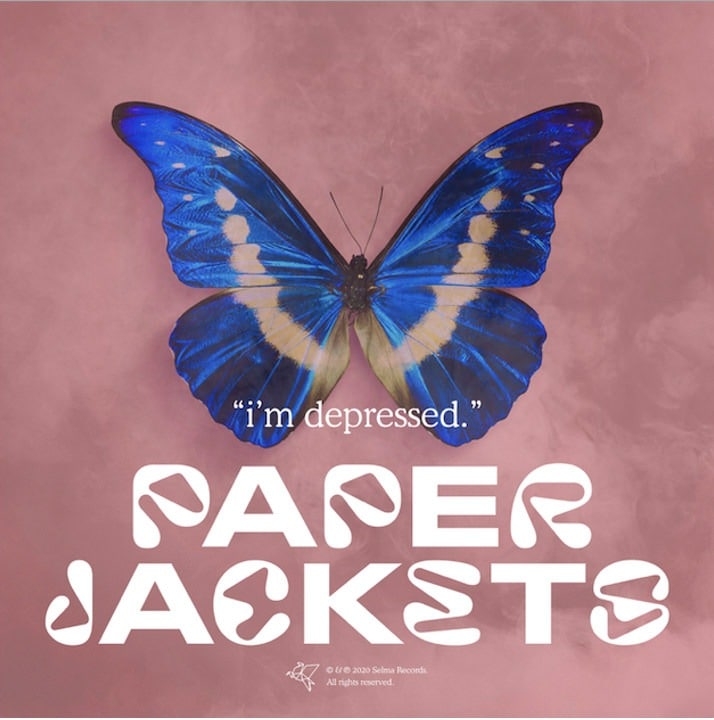 LA based alternative – pop band Paper Jackets have shared a new single titled “i’m depressed.”, a track written about the mental toll the downfall of 2020 has taken on all of us this year, juxtaposed with an upbeat pop sound. “i’m depressed” was produced and co-written by the production duo HEAVY (The Unlikely Candidates, lovelytheband). Fans can check out a visual for “i’m depressed.” below.

On writing the new track, Paper Jackets vocailst Aimee Proal shares, “The 2020 experience heavily influenced this track. After months of limited human interaction, I found myself out of content to write about. I told James I was too depressed to write anything. Oddly that’s exactly what became the song in the most sincere form while keeping a sense of humor in the lyric at the same time. From there, we teamed up with HEAVY and ‘i’m depressed.’ took on a life of its own.”

“’i’m depressed.’ is an angsty anthem and a beautiful tantrum. As adults there’s no way for “normal people” to scream, so we’re doing it for you. The thing people tend to forget these days is that life has always been hard and this is just the new version. We like to stay apart of the journey,” vocalist James Mason adds.

HEAVY is an LA based songwriting/production duo made up of two incredibly versatile multi-instrumentalists; Jordan Miller and Jason Bell. Together they’ve amassed over 175+ mil streams on Spotify and had 3 Top 10 Alt hits over the past year with lovelytheband’s “maybe, i’m afraid,” Dirty Heads’ “Celebrate,” and currently The Unlikely Candidate’s “Novocaine” (2 weeks @ #1 Alt). Recently, they’ve been working with artists such as Chaz Cardigan (Capitol), GASHI (RCA), Max Frost (Atlantic), Against The Current (Fueled By Ramen), among others and have been collaborating with other writers & producers such as Nolan Sipe, Michael Matosic, Space Primates, and more.

“i’m depressed” follows up Paper Jackets’ recently released single “Drugs & Honey,” the first offering from the band’s upcoming collection of songs, Souvnenirs Volume Two, due to be released in 2021. In July 2020 the band shared their latest album, Souvenirs Volume One, the first part of a collection that stretches and pulls at the genre of alternative rock while revealing a nostalgic theme throughout; touching on creative moments the band has experienced together to addiction and its many forms. Souvenirs Volume One is available to check out now at paper-jackets.lnk.to/MlihUNIN.

Paper Jackets was formed in 2016 as each musician was rotating through a number of Sunset Strip jam nights. What started as a few random meetings and sessions has since blossomed into a four-piece group consisting of James Mason (vocals), Emily Dickinson (keyboard, live backing vocals), Jonny Vesely (guitar), and Aimee Proal (vocals). After releasing the EP Don’t Lose Your Head in 2018, Mason & co. grabbed opening slots for Bishop Briggs and the X Ambassadors and they haven’t slowed down since.

For all members of Paper Jackets, the road to creating the collections of Souvenirs has been long and not without its bumps. However, they’re more than excited for whatever the next steps may be. “There’s a sense of urgency,” says Mason, speaking to the collection as a whole. “There’s this mentality of, we have to do this now, we have to make these songs now…There’s this artistic force that pushes me in that way.” Whatever force they are following, they’re sure to take some souvenirs for the road.