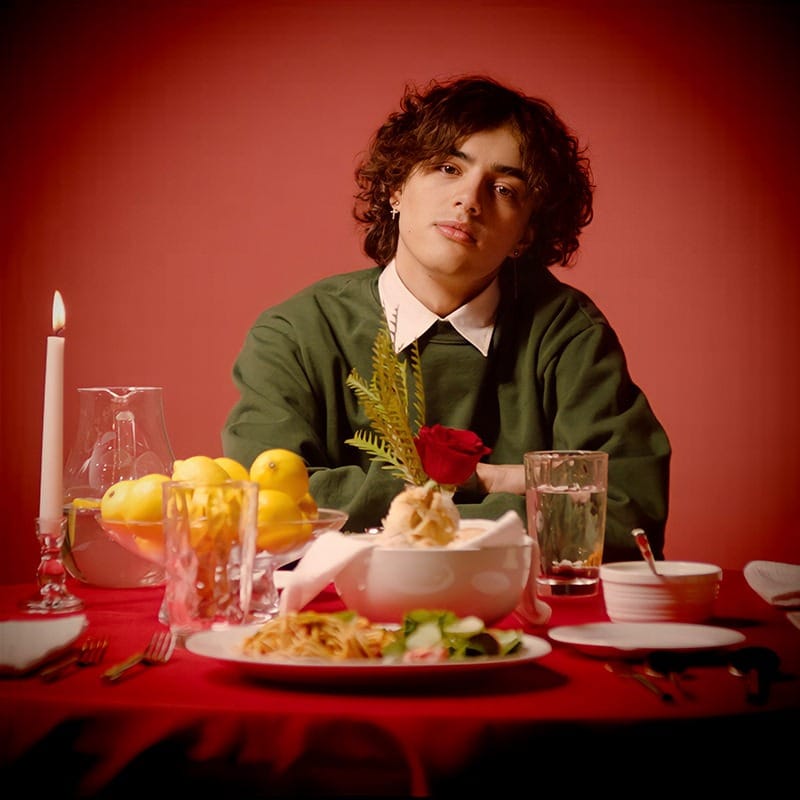 Jordan Suaste has shared the bittersweet but beautifully feel-good video for his new single “Patience.” An intimate look at unrequited love, “Patience” showcases the pure vulnerability and effortless charisma that audiences have come to expect from the 19-year-old singer/songwriter, who first made waves with his breakthrough hit “Body.” Check out the video for “Patience” below.

Directed by Brent Campanelli (an L.A.-based filmmaker/photographer known for his work with artists like Ashe), the video for “Patience” finds Suaste alone at a dinner table set for two, complete with lit candles and a vase full of red roses. Over the course of the R&B-laced and irresistibly catchy track, the video follows Suaste through a series of reflective moments: listening to vinyl with his headphones on, daydreaming in his bedroom, dancing poolside, gazing into the bathroom mirror and turning his toothbrush into a make-believe microphone. Although the video perfectly captures the lonesome mood at the heart of “Patience,” Suaste infuses every shot with his radiant energy and endearing presence.

Says Suaste, “’Patience’ is about being over someone’s bullshit. It’s about feeling lonely, but instead of just sulking, it’s a song about taking charge, setting boundaries and knowing when enough is enough and that’s what I wanted the video to show. Of course there’s a little bit of sadness, but for the most part the idea was to keep it kinda boppy and light hearted. I’m so excited to finally get to share it with everyone!”

Wonderland says, “Patience” is “layered with smooth honeyed vocals and fresh charisma, the 19-year-old multi-instrumentalist draws us in instantly and weaves together a story of unrequited love and vulnerability.” “Patience” is the latest deeply personal visual from Suaste, who premiered the official video for “Body” in September. A poignant meditation on empowerment and freedom, the “Body” video helped bring even greater success to Suaste’s breakthrough hit — an early-2020 release that appeared on Spotify’s Viral 50 charts in 22 countries (reaching #3 in the U.S. and #8 on the Global Viral 50 chart) and landed on major playlists like Spotify’s Pop Rising and Apple Music’s New in Pop. Suaste also earned acclaim from outlets like Idolator (who named him “one of 2020’s most exciting newcomers”) and Flaunt (who praised him for “inject[ing] honesty, vulnerability and authenticity into his lyrics…pairing his truths with smooth comforting vocals”).

With the arrival of “Body” and “Hookup Culture,” Suaste introduced a much-needed new voice into today’s pop landscape. On the strength of those DIY-produced tracks, Suaste quickly amassed a global following drawn to his detailed honesty — an element that goes beyond surface-level vulnerability to reveal rarely-spoken truths about self-image and self-worth. Having penned his first song at the age of five, Suaste dropped out of school at 16 and soon started posting original songs on Instagram. As he honed his songwriting craft, he linked up with musician/pianist Jake Ostler and Ostler’s friend Jaxon Garrick, a self-taught producer. Written by Suaste with production from Ostler and Garrick, “Hookup Culture” was released in May 2020 and immediately drew attention for its bittersweet takedown of toxicity in modern dating. Just two weeks later, he delivered “Body” and saw his audience grow exponentially — garnering over 50,000 YouTube subscribers in just over a month and surpassing 500K TikTok followers — as fans instantly adopted its message of renewed strength and resilience. Thanks to the unstoppable momentum of his first two singles (as well as the gorgeously sparse “Body (Acoustic),” released in July), Suaste has already built a devoted fanbase who’ve come to rely on their community as a uniquely safe space: a testament to his genuine open-heartedness, as well as his commitment to total transparency.

Suaste is currently working on new music and moving forward with his mission of inspiring others to own their sensitivity, and fully embrace the beauty in being unapologetically yourself.