Meghan Trainor Shares Video for “I Believe In Santa” 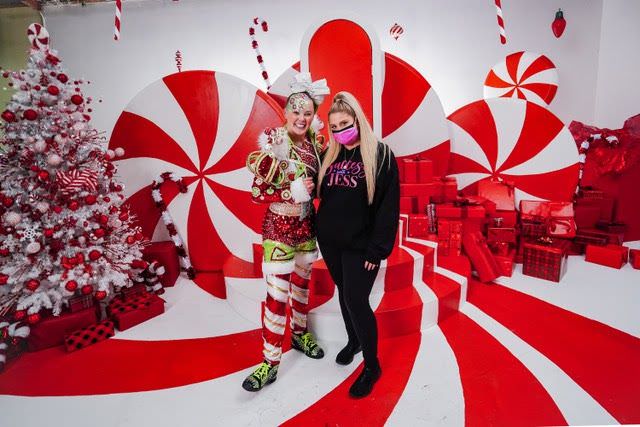 With Christmas a little more than two weeks away, ​Meghan Trainor​ has unveiled a new high energy music video for her original holiday song ​“I Believe In Santa”​ starring none other than her friend, mega star ​JoJo Siwa​. Watch it ​below.

Powered by show-stopping vocal runs and sweet seasonal swagger, the video seamlessly translates the song’s magic on-screen. After stumbling upon Santa’s house,​ Siwa​ electrifies every room she encounters with her unstoppable choreography. She dunks herself in marshmallows and hot cocoa, rocks shiny elf threads, and even inspires Santa J Claus (our favorite ​TikTok​ Santa) to bust out his breakdancing skills. Siwa​ perfectly performs ​Trainor​’s lyrics, ​“I believe in Santa, not just in December, baby!”

“JoJo is a superstar!,” said ​Meghan​. “She works so hard and her incredible, positive energy is contagious. It was an honor to have her star in this music video!”

“I have always admired Meghan as a singer, songwriter, entertainer! I am so happy and honored to star in her video,” said ​JoJo​. “I can’t wait for the world to see it!”

One of many gifts under the tree, ​“White Christmas” ​just soared to #1 on the AC chart, while holding #1 on the mediabase Holiday Chart for the fourth consecutive week. Plus, ​Meghan​ continues her television takeover. She hit the stage at NBC’s ​TODAY Show​ for the Rockefeller Tree Lighting. Last night, she lit up The Tonight Show Starring Jimmy Fallon​, performing ​“Holidays”​ joined by ​Earth, Wind & Fire​. Maintaining this momentum, she will be performing on ​The Kelly Clarkson Show​ and ​The Late Late Show with James Corden​ next week.

A Very Trainor Christmas​ is packed with all your favorite Holiday classics along with a total of six new original songs, including the previously released “​I’ll Be Home​” and “​My Kind of Present.​” “​Holidays​” [feat. ​Earth, Wind & Fire​] dangles mistletoe from the disco ball as funky horns and a wild beat resound through Christmas Eve and into the morning. “​Christmas Party​” brings the entire family together, while “​Christmas Got Me Blue​” gets the lonely hearts dancing.

Of course, it wouldn’t be the holidays without friends and family. ​Seth MacFarlane ​joins ​Meghan​ for a soulful and sweet rendition of “​White Christmas​,” while Meghan’s cousins,​ Jayden​,​ Jenna​, &​Marcus Toney​ take flight with “​Rudolph The Red-Nosed Reindeer.​” Marking the most sentimental moment of all, dad ​Gary Trainor​ guests on a joyous “​Have Yourself A Merry Little Christmas.​”