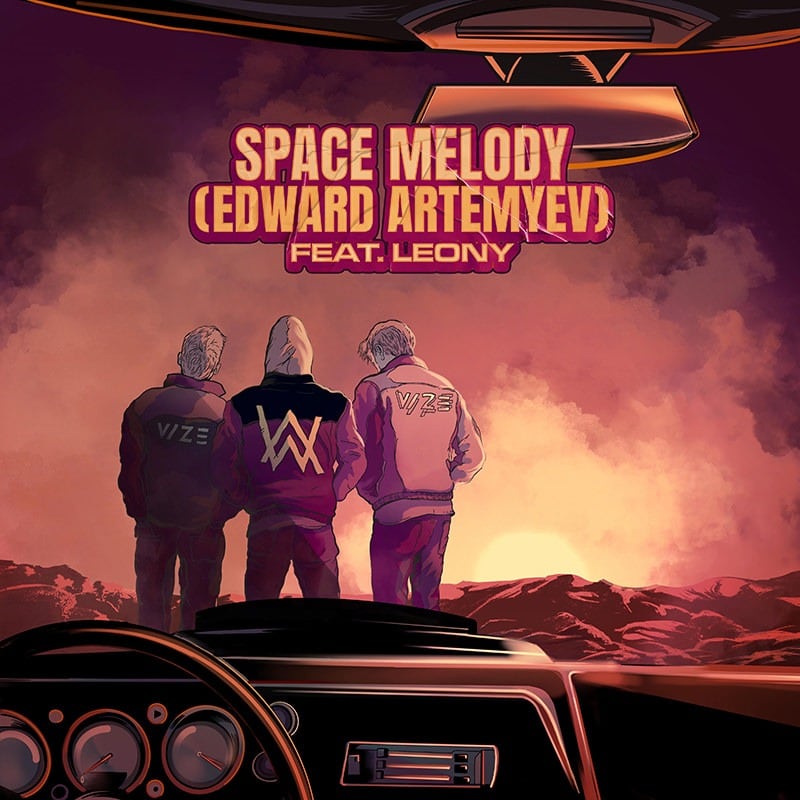 A year full of turbulent events lays behind us, as producers and DJs VIZE (“Close Your Eyes” + “Never Let Me Down”) and Alan Walker (“Faded” + “Alone”) have released their new song “Space Melody (Edward Artemyev)” today. Get it HERE.

The song is an audible electronic and futuristic journey through space & time with vocals by German singer Leony that features a well-known melody originally created by Russian film composer and Electronic music pioneer and producer Edward Artemyev in 1979 for the movie “Siberiade”.

Producer Vitali Zestovskih, who forms part of the music project VIZE, recalls having dreamt of making a cover version of this specific melody for a long time. To give it that additional necessary futuristic and electronic feel, none other than Norwegian producer Alan Walker was the dream collaboration for the track. With debut single and global mega hit “Faded” in 2016, he transformed the Electronic music game and made a mark with his characteristic futuristic sound that is now also on “Space Melody.”

“It’s been great working with VIZE on this track! As soon as the demo came my way, I recognized the melody from the original tune, and it was inspiring to work on this remake,” says Walker about the collaboration.

Vitali Zestovskih feels very much the same, “Collaborating with Alan Walker is like a dream come true. His influence in the electronic dance music scene within the past years is simply incredible. […] I teamed up with Leony on the vocals and produced multiple versions. None of them were good enough, so we started looking for the right producer to give the track ‘the certain something’ and here we are. We think, the result is simply amazing and are super excited for everyone to listen to it.”

The single follows up a series of streaming hits by German-based duo VIZE in 2020 that include works with Imanbek, Alle Farben, Miss Li, Tujamo, Felix Jaehn and Tom Gregory and comes right when it’s needed most. Many people in the world feel exhausted after a turbulent year of strenuous events and a pandemic that held the majority in isolation, self-reflection and left them with a desire for a better year to come. The song fits perfectly into that scheme: both lyrics and the production let the audience dive into a “better place” beyond this world and let them hope for the next year to be very different from 2020.

VIZE is a production and DJ project spearheaded by producer Vitali Zestovskih and DJ Johannes Vimalavong. While Johannes was born and grew up in Germany, Vitali was born in Russia but grew up in Germany after his parents relocated to Germany in 1998. They have made themselves a name in the German and European music industry in the past three years as writers and producers of many hit records for German artists like Gestört Aber GeiL, Adel Tawil or LEA and remixes and productions with and for other producers like Sam Feldt, Joel Corry, Dimitri Vegas, Imanbek, Alle Farben, Sondr or Felix Jaehn. The breakthrough came with their 2018 remake of The Wanted’s 2011 hit “Glad You Came” that was followed with the Number-1 hit record “Baby” together with German rapper Joker Bra and “Never Let Me Down” with Tom Gregory. Just recently they achieved a tremendous Chart and Airplay success with “Bist Du Okay”, a collaboration with German singer Mark Forster, and another Top-5 hit record with Joker Bra and Leony called “Paradise”. On Spotify they account for more than 800 million streams to date.

Alan Walker does not really require an introduction in most scenarios: with his 2015 released multi-billion stream global hit record “Faded” the 23-year old British-Norwegian manifested himself as one of a kind in the electronic music genre. The song has achieved more than 1.3 billion Spotify streams and the accompanying video close to 3 billion YouTube views worldwide. His strong progressive electronic and futuristic productions are popular around the world, not only among his fans. He has thus far collaborated with international superstars for productions or remixes such as Avicii, Kygo, Miley Cyrus, OneRepublic, Madison Beer, Farruko, Charli XCX, Ava Max or even the legendary composer Hans Zimmer, with whom he released “Time (Alan Walker Remix)” earlier this year. Alan Walker has already performed on the most prestigious Electronic Music Festivals in the world, including Tomorrowland, Lollapalooza, Ultra Music Festival and Coachella. With more than 19 million monthly listeners on Spotify he is regarded as one of the Top-150 most listened to artists worldwide. Walker holds over 115 million followers across his social media channels, largely composed of his fandom “the Walkers”.